2012 Hammers take to the track 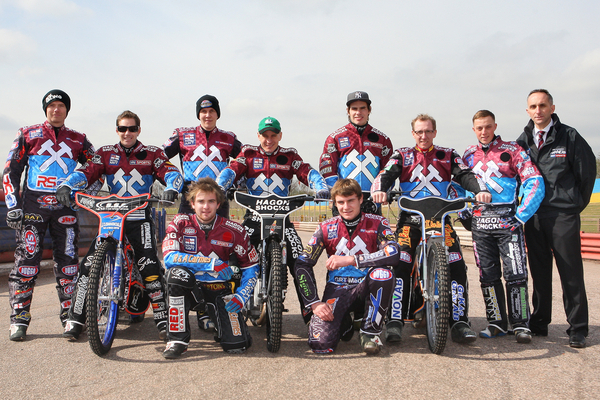 Under clear blue skies, the 2012 Lakeside Hammers took to the track for the first time today in a team practice session.  All nine squad members were present, initially posing for team shots in front of a selected number of media organisations, before taking to the track individually and in pairs to complete a large number of laps.

Hammers Co-promoter Jon Cook commented “Rather than trying to condense everything into the few hours of a traditional press and practise event, we secured the whole day at the Raceway. This provided an ideal opportunity for all of the team to get lots of valuable track time, allowing them to test their set ups and engines, and iron out any gremlins at their own pace.

Some of the Hammers have already had competitive track time such as Robbo, Kauko, Justin and Richie in the early Premier League challenges, while Lee, Davey and PK have taken part in individuals, so these practice sessions are ideal for them to get dialled into the Raceway, and for Rob and Kim to blow the cobwebs away and get some laps under their belts.

We want to come out with all guns blazing against Belle Vue in our first Elite League meeting on the 30th March, and plan to give all the squad further track time between now and then, which also allows them to focus on putting on a show for the fans at the Hammers Open night this coming Friday.”

Tweet
« Hammers doing it for the Community.. » Robbo is ready to rock!