Hammers end year with a win 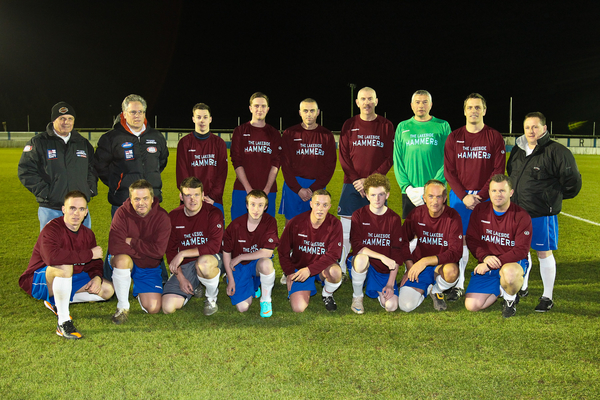 The Lakeside Hammers signed off their year of sporting action with a win over local rivals Ipswich on Tuesday night, all be it on the football pitch not the track, as the sides met in aid of the Lee Richardson Support fund.

Sporting their own Hammers kit for the occasion with #RICO on the back of each shirt,  the team were led into action by captain Graham Stuart, former star of Chelsea, Charlton and Everton with new signing Lewis Bridger making his Hammers debut, as well as Rob Mear, Jerran Hart, ex-Hammer Phil Morris and Rye Houses’ Danno Verge.

Despite having more of the game early doors the Hammers found themselves behind when a strike from the opposition was superbly saved by goalkeeper Ian Jeffrey, of Community partners Ruggles & Jeffery, but unfortunately the rebound struck centre-half Morris and went into the net.

The local rivalry now kicked in with the Hammers determined to equalise, whilst Scott Nicholls forced to retire from the match with a knee injury, after a forceful tackle. Hammers team manager Mark Sexton now rang the changes with Hart and Bridger withdrawn and Verge and Hammers long time mechanic Ben Read entering the fray. Read “The Rock” moved into the centre of defence allowing Jon Cook to join his younger son Kai up front. 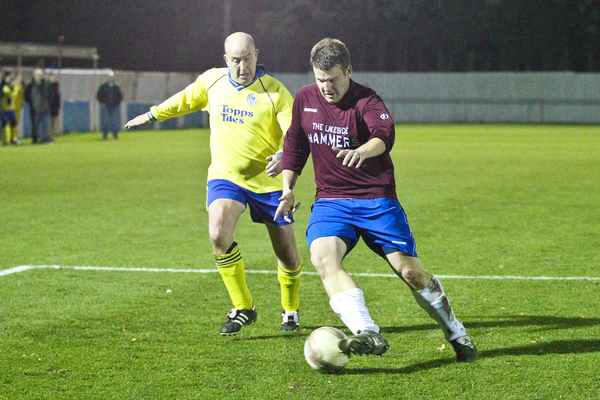 As the pressure on Ipswich increased, it was only a matter of time before the Hammers scored and with Stuart and Jacob Cook,  eldest son of the Hammers Co-Promoter, now running midfield it was no surprise when Stuart went on a mazy run which ended with the ball in the Ipswich net.

The second half saw Glen Reynolds another of the Hammers mechanic team enter the fray and although packing the pounds,  the former semi-pro showed he had lost none of his talents combining well on the left with former Hackney rider Steve Verge who put in a very impressive ten minutes before withdrawing for his own safety.

The match now stepped up a gear with both teams looking for victory.  Danny King for the Witches kept the Hammers back four busy, while both striking Cooks went close on several occasions with Daddy Cook surprising all present by lasting the full match and still running at the end.

Stuart and Jacob Cook continued their dominance of the midfield while young Danno and Rob Mear combined superbly on the right to keep the pressure up.

And so it was to be the Hammers night, as on the 85th minute Jacob Cook rushed into the box only to be up ended by two Ipswich defenders. Penalty screamed the ref, amidst protests led by Morton Risager and former Hammer Shaun Nicholls, accusing the young Hammers star of a dive. 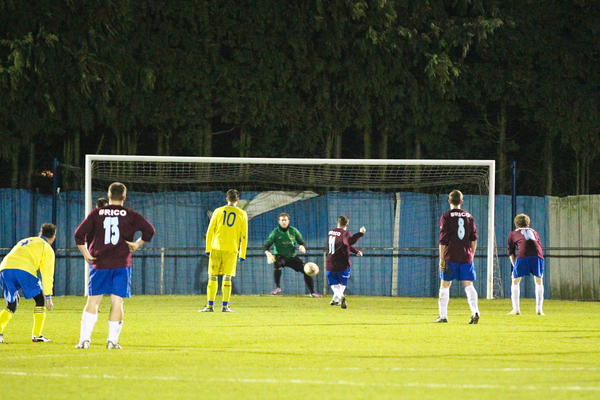 Up stepped Stuart to bag his second and give Hammers the lead. Even the late introduction of Jeremy Doncaster could not save the home side and Hammers victory was achieved.

A big thanks to Peter Thorpe and all concerned at Ipswich and a well done to the Hammers, those lacking in football talent more than made up for it in enthusiasm,  especially Lewis.  A special thanks to Graham Stuart for being a superb captain on the night and to Phil Morris, Ben Read, Rob Danno and Kai and Jacob Cook for having the football skills needed to secure the win.

As Chris Louis argued way into the night about the fact it wasn’t a fair night as we are Elite whilst  he is Premier, the Hammers were busy preparing for their next victims as in Wiltshire, a little cherubs sleepy-bys were being disturbed by a text message.  Rosco you are next!   Watch this space.