Kennett experienced the ultimate agony of being the class of the field during the qualifying races at Coventry before missing out in the Final.

The Vortex Hammers star reeled off four wins out of five, including several of the quickest times of the night, dropping his only point in his fourth outing to Robert Lambert.

At that stage Kennett and Niels-Kristian Iversen were the meeting leaders, but when they met in Heat 19 Iversen finished last, which left Kennett two points clear of Fredrik Lindgren going into the Final.

There might have been two Hammers representatives in the decisive race, because Nilsson was also fast and consistent throughout the meeting with wins in his second and third rides helping him to finish on ten points. 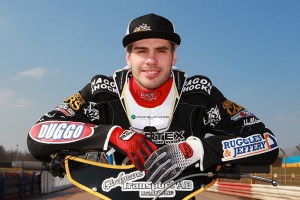 But the Swede missed out to Iversen and Chris Harris in the semi-final, meaning he was classified fifth overall.

Kennett had first choice of starting position in the Final and selected gate two – but he made his worst start of the meeting at just the wrong time.

A fierce battle between the other three riders on the first lap resulted in Wolverhampton rider Lindgren taking the title, ahead of Iversen and Harris.