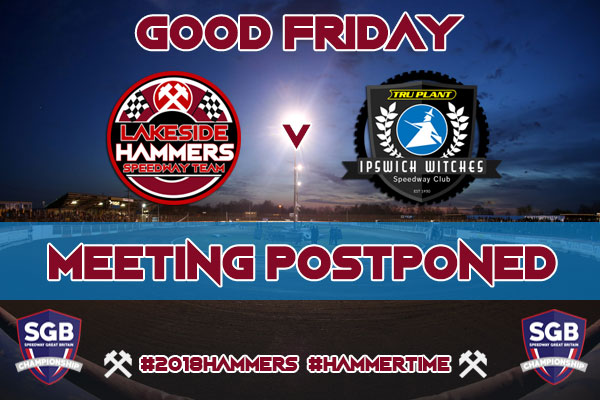 Ipswich have also confirmed that this afternoons meeting against the Hammers is also postponed due to the weather forecast.  A new date will be confirmed.

Lakeside have taken the early decision to postpone their home leg of the Good Friday double header with Ipswich (8pm).

The Hammers were set for their first home meeting of the season in the Championship Shield but will now take on the Witches on a re-arranged date to be confirmed.

Co-Promoter Jon Cook said: “Unfortunately, in view of the amount of rain that has already fallen in the last few days and importantly the terrible forecast currently scheduled for tomorrow afternoon onwards, which will at best result in a freezing, damp evening, we feel it best to make this early decision to avoid the potential inconvenience to our fans tomorrow.

“Whilst all at the club were looking forward to the clash with the Witches at the Raceway, the Good Friday forecast, which has already seen the cancellation of other meetings, ultimately left us with little choice.”

The Hammers will still head to Foxhall for an afternoon clash with the Witches (2.15pm) – and team boss Will Pottinger says they will turn their attentions to another strong away showing.

Pottinger added: “Of course it’s frustrating to have our first home meeting as a team called off, but there isn’t much that can be done about the weather.

“Hopefully the weather plays ball in the afternoon, and we’ll now focus on trying to put in a good performance to get something at Foxhall against a strong Ipswich side.”