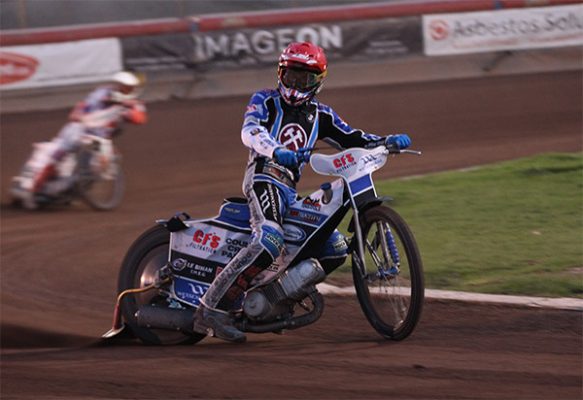 Lakeside produced a remarkable comeback to beat reigning Champions Sheffield 52-38 in their own back yard.

The Hammers found themselves ten-points down with six races gone, struggling with conditions caused by a heavy downpour 15 minutes before the scheduled start time.

But the Purfleet outfit rallied together and began dominating the starts for the remainder of the meeting.

And that proved pivotal in their fight back as they sealed eight heat advantages in the last nine races.

A big turning point came when Adam Ellis was brought in as a tactical substitution alongside skipper Richard Lawson in Heat Nine, and the pairing left their opponents for dead, storming to a big 5-1.

Hammers team manager Will Pottinger was thrilled with what he feels was one of the performances of the season.

“It reminded me very much of when we went to Redcar a couple of months ago,” Pottinger said.

“We made a terrible start to that one as well but the track conditions here were much worse than at Redcar so this is probably our best performance so far.

I’m so proud of all the riders; they all put in a terrific shift and even when we were a fair bit behind early on they never panicked. There’s a great belief within the team and they’ve all got the right attitude.

Everyone contributed well and everyone got at least one race win except for Zach (Wajtknecht), who did his job at No.2, and that makes for a great team effort.”

Ellis was instrumental for the Hammers, storming his way to a paid maximum at No.3.

He was supported superbly by Lawson who recovered from a retirement in his first outing to win three of his next four while No.1 Nick Morris also went unbeaten by an opponent in his last three rides.

Ben Morley won two of his three outings while Kyle Newman and Zach Wajtknecht both chipped in with five a-piece.

And there were more encouraging glimpses from reserve Alfie Bowtell who battled hard and also secured a race win for his efforts in Heat Eight.

Lakeside are back in action next Thursday (August 2) when they travel to Ipswich before facing the Witches at the Arena-Essex Raceway the following night (Friday, August 3).