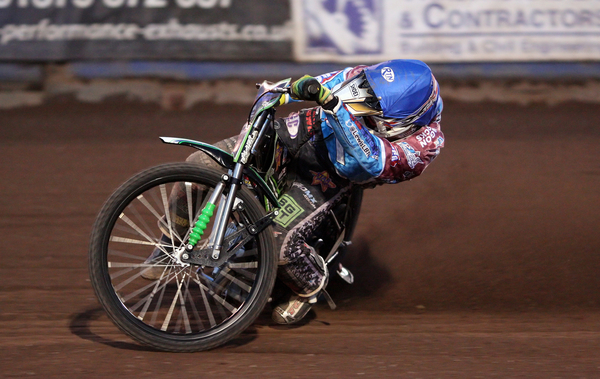 Jon Cook commented on the vital victory over the Aces stating: “Piotr (Swiderski) has been absolutely top drawer the last few weeks and LBR (Lewis Bridger) last night was magnificent and but for a fall in heat six would have been unbeaten. Heat fifteen was a fantastic climax to the night and Lewis’ re-pass of Zagar followed by Piotr to gain all three League points was up there as the race of the season in front of yet another big crowd. The season is really alive now and we can’t wait for the visit of Swindon in six days (Friday 12th July) and the timely return of Richard Lawson, who we really missed yesterday.”

In a close, hard fought match the Vortex Hammers finally came out victorious by 52-38 with Piotr Swiderski top scoring with paid fourteen points from his five rides. He was well supported by Lewis Bridger (paid twelve points from five rides) and the captain Davey Watt (ten points from four rides). Vital points were also scored by Kevin Doolan (paid eight from six rides) Seb Ulamek (paid six from four), Peter Karlsson (six points from three rides) and the one point scored by Magnus Karlsson the guest replacement for Richard Lawson.

Following two victories from his first two rides Peter Karlsson was involved in a very nasty looking crash in his third ride but was eventually able to walk back to the pits although he was unable to continue in the meeting. He will feel very battered and bruised this morning but everyone present at the Raceway was relieved to see him get up from the crash.

Belle Vue’s Grand Prix star, Matej Zagar, topped scored for the Manchester based side with twelve points from six rides with former Hammer, Kauko Nieminen, providing the main support with eleven points from his six rides.

Prior to the Vortex Hammers next home match next Friday, 12th July, against the Swindon Robins they have to visit the Birmingham Brummies on Wednesday, 10th July.

Currently the Brummies are in second place in the Sky Sports Elite League table two points behind the leaders, Wolverhampton, and four points ahead of the Vortex Hammers, who are in third place. Swindon are in fourth place just one point behind the Hammers.

With the top four teams in the League at the end of the season due to contest the Play Offs for the Elite League title the two matches next week for the Vortex Hammers could be have a big say in the final League positions.