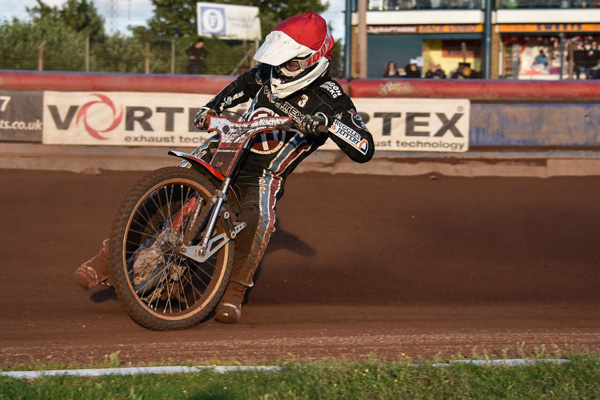 Lakeside fell agonisingly short of a consolation point as they went down 51-41 at Wolverhampton on Monday night.

The Vortex Hammers put in a battling display at Monmore Green and trailed by just four points entering the final two races.

But returning World Champion Tai Woffinden came up trumps for the home side in the final two races to ensure the Purfleet outfit suffered last-gasp heartache.

It was an improved away performance from the Hammers with a number of impressive performances.

Richard Lawson roared to two classy wins in his opening two rides before walking away from a horrific crash in heat 11.

He admitted they were hugely frustrated to leave Monmore Green empty handed after a gutsy team effort.

Said Lawson: “We were pretty gutted not to get a point. It’s come down to the last heat again and we’ve just fallen short.

“A point tonight would have given us a good chance of making the play-offs, and we were really close.

“We’ve got more chances at Coventry and King’s Lynn, so we just have to take the positives and look forward to those meetings now.”

Skipper Andreas Jonsson top scored with 12 points, but he could only manage second place behind Woffinden when he took their tactical ride in heat 10.

Mear joined forces with lower order partner Lewis Kerr to strike a timely maximum in heat 12 as
Kerr ended a night plagued with mechanical gremlins on a high.

Edward Kennett chipped in with five points, but rider replacement accounted for just two points in place of Lewis Bridger after the late withdrawal of the British racer through illness.

After slipping out of the Elite League top four, the Vortex Hammers will be back in action with a crucial encounter at Coventry on Friday (7.30).