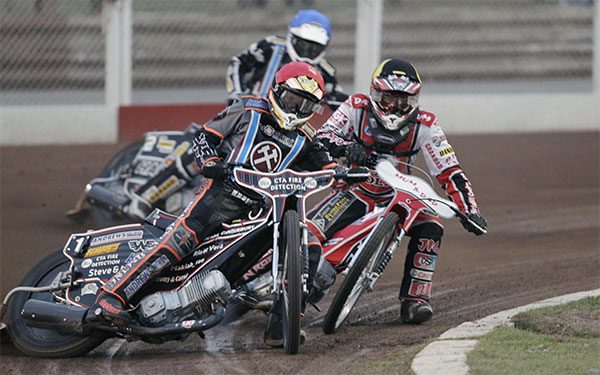 Lakeside will look to complete a quick-fire double over Belle Vue when they head to the National Speedway Stadium on Wednesday (7.30pm).

The Vortex Hammers edged an impressive 49-41 win over the Colts at the Arena-Essex Raceway on Friday and will now look to repeat the trick on their travels.

It will be a hectic two days for Kelvin Tatum’s side, who will travel to the Isle of Wight on Thursday night (7pm).

They will be without David Mason, who is still feeling the effects of his crash against Cradley – but Tatum is keen to see the rest of his side step up against the table-topping Colts.

Said Tatum: “I think it will be tough there, and we’re under no illusions that they’ll be favourites around their own track.

It’s totally different to our track at Lakeside and we’re also without David Mason, who is still suffered the hangover from a head injury after he crashed against Cradley.

We’re down to rider replacement for him, so we’ll be looking for all six riders to step things up against a team who are red-hot at home.

We’re going there under no illusions as to how tough it’ll be, but we’ve got nothing to lose and everything to gain.”