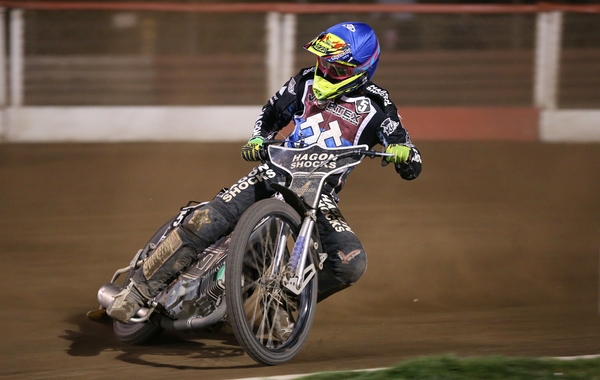 Returning Lakeside ace Lewis Bridger is raring to go ahead of his comeback in the Spring Trophy this Friday 18th March.

The British star will make his first competitive appearance in almost a year as the Hammers kick-off their 2016 campaign. He will first be put through his paces at press and practice day on Thursday before taking on his team-mates in the individual meeting, which starts at 8pm.

12 riders, all with Lakeside connections, will do battle at the Arena-Essex Raceway, over 12 heats, with a winner takes all final, whilst a number of Hagon Shocks Academy races will also take place over the course of the evening.

Bridger has revealed he is heading into the meeting feeling relaxed and with no expectations after his time away from the sport.

The all-action 26-year-old said: “I’ve got the same routine this week, and I’m just going to try and treat things as usual. I’ll ease myself into it on Thursday at press and practice and try not to think too much about things. I’ve had great preparation the last few weeks. Things went really well out in Croatia with Team GB, we got the bikes working nicely so I’m feeling good after that.

Hopefully we can get the same feel to the bikes around Lakeside on Thursday and then I can head into the Spring Trophy meeting on Friday feeling confident.  I feel like the pressure isn’t really on because I’ve been off the bike for a year, and I’m not really going in with any expectations. I guess everyone would like to be able to have a year off and come back stronger, so in that way I’m sure a lot of people will be hoping I struggle a bit. But I’ve worked harder than ever with my fitness and diet over the winter, and I’ve got the best team I’ve ever had around me with Revolution.

I’m just hoping that will all pay off and I’ll get the reward for it. It might not happen straight away, but hopefully I can hit the ground running with a good meeting on Friday.”

Bridger will be joined in the line-up by all of his 2016 Hammers’ team-mates alongside No.8 Dennis Jonsson. Former Hammers’ favourites Leigh Lanham, Stuart Robson and Ben Morley will also return to the Arena-Essex Raceway for the event.

“There’s a real buzz around the club heading into the season and Friday is an extension of previous nights when fans get a chance to get closer to the riders and see behind the scenes. Supporters will have the chance to walk the track prior to the meeting (between 6:30pm & 7:30pm) whilst the pits will be open for viewing, as will the Referees box. An autograph and photograph session will take place at 7-15pm at the top of the pits.”

Fans that have reserved this year’s team shirt can pick up their orders on press day from 1pm, or from 6pm on Friday. Further shirts are available to those that haven’t yet ordered.

Admission at the turnstiles on the night: