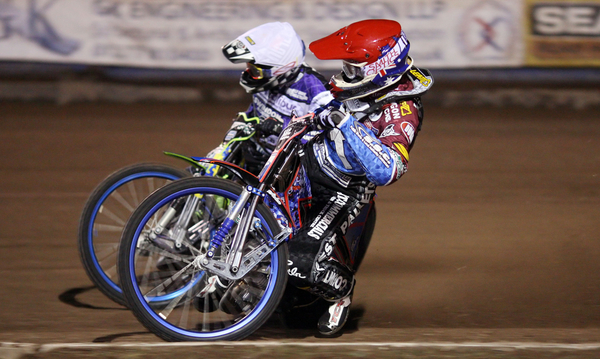 The Birmingham Brummies are the Vortex Hammers next opponents this Friday, 12th April, when the two teams meet at 8pm at the Arena Essex Raceway.

The Brummies started the year well but slipped to a home defeat on Wednesday against the Swindon Robins, the team who beat the Vortex ammers last Friday.

The Vortex Hammers Co Promoter Jon Cook commented: “It’s time to get the season properly underway and with no Davey (Watt) we need all of the team to pull their weight. This meeting is the last home Friday match for three weeks due to the break for the Grand Prix but Sky Sports will be in town a week on Tuesday (23rd April) when the King’s Lynn Stars will be with us. It has, therefore, been decided that the Vortex Hammers will again offer kids admission for just £1.”

The Vortex Hammers go into this meeting minus their captain, Davey Watt, who sustained a broken scaphoid in the home match against Swindon. His rides will be covered by using the ‘Rider Replacement’ facility, which will enable any of the remaining six riders to take an additional ride.

Birmingham will be led by a former British Grand Prix winner, Chris Harris, who joined the club over the winter from their near rivals, the Coventry Bees. Former Hammer Daniel King captains their side but their three remaining top five team members will all miss the meeting due to commitments with their respective Premier League clubs. Josh Auty will be replaced by Workington’s Australian Rusty Harrison and Ben Barker’s place will be taken by Wolverhampton’s American Ricky Wells whilst the Brummies will use ‘Rider Replacement’ to cover the rides of their Australian Jason Doyle. Their team is completed by German Martin Smolinski and Argentinean born Nicolas Covatti, who will occupy the reserve berths.

The ‘Kids for a Quid’ initiative covers children aged six to sixteen inclusive who will be admitted to this meeting for just £1. The other admission prices are: – £17 for adults, £14 for Senior Citizens, Students and Disabled, £12 for Unemployed and 17 and 18 year olds and children under the age of six admitted free of charge provided they are accompanied by a paying adult. Proof of age or status may be requested.

The action gets underway at the Arena Essex Raceway on Friday, 12th April, at 8pm with the Grand Parade of riders scheduled for 7.45pm.