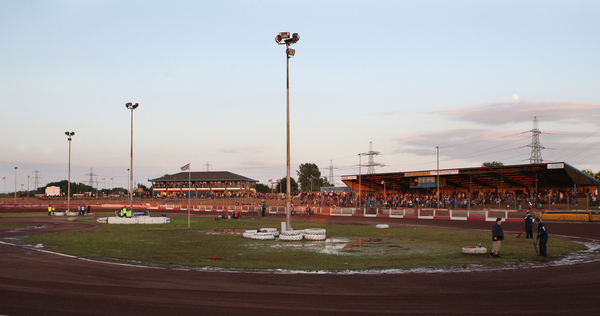 The operation on Bryn’s hip yesterday (a full hip replacement was expected to have been done) appears to have gone well and he was sitting up in the bed that evening chatting to his daughter Carys.

Apparently he is not in any pain but that is probably due to the effects of the medication he has taken! At this stage it is not known how long he will remain in Swindon hospital but it is possible that he will be transferred to another hospital nearer his home quite soon.

More news should be received over the next day or so.

Prior to the start of last night’s Elite League match at Swindon,  Bryn Williams had a nasty fall. He was examined by the paramedic at the track and it was suspected that he had sustained a possible fracture to his right hip.

The County Ambulance was called and Bryn was taken to the nearby Swindon Hospital. The Vortex Hammers General Manager, Alan Sargent, went to the hospital at the end of the meeting to see him in the Accident and Emergency Department. Follow a series of x-rays it was confirmed that Bryn has broken his hip and will require surgery to insert a pin/plate to the hip.

At this stage it is not known how long Bryn will be kept in Swindon Hospital but everyone involved with the Vortex Hammers wish him a speedy recovery.

He was in good spirits when Alan Sargent left him just before midnight and was already complaining that there was no mobile phone reception in A & E and was worried that he would be unable to announce at the Isle of Wight on Tuesday evening! He also was unhappy that this ‘Speedway injury’ would put pay to any possible plans he had of visiting his friends in Australia during our winter.

We will provide further updates on Bryn’s progress as and when we receive further information.