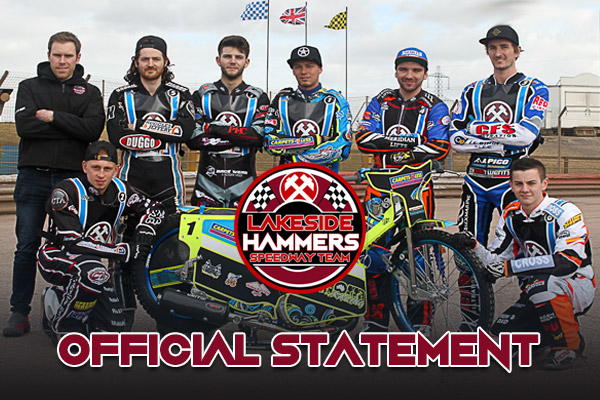 The Lakeside Hammers will complete their push for this season’s Championship silverware at the Rye House stadium, after one last farewell to their Essex home on Friday 14th September.

This follows final confirmation of the decision to close the Arena Essex Raceway to all motorsports at the end of year.

“We have acted swiftly to ensure that the Hammers can continue racing not only this season, but for the foreseeable future” said club owner, Stuart Douglas.

“We had a one time opportunity to take the club to Rye House, a stadium with superb and ever improving facilities for the speedway fan, and it’s one we are excited to embrace.”

“Our ongoing discussions with Thurrock council and other sporting partners for a sports hub the town both deserves and needs will continue apace, whilst we can now enjoy a stadium designed for Speedway, with the race night availability needed to both race and compete” he added.

“Since Chic Woodroffe first introduced the speedway to his racing oval in 1984 this club has seen some tremendous highs and lows.

The final speedway meeting on Friday 14th September will be a night to commemorate all those memories, and to invigorate ourselves for a brave and bright new future.

The fact that it happens at a time when we have one of the potentially most successful teams to race in the Hammers colours is cause for great excitement for all fans old and new, all able to enjoy the rest of the season with us at Rye.”

The new chapter starts immediately after the Arena farewell, as the very first fixture of the Hammers in the House takes place the next night, on Saturday, 15th, when the club host Newcastle

Hammers Co-Promoter Jon Cook continued  “It’s going to be a fantastic weekend not only for the Hammers’ fans that can take in both meetings, but also for the Rye House fans after the early end of their season.

On the team front the lads will be well practised. Our track man, Ken Driscoll, who is fast establishing himself with riders as one of the best in the business, will be working in tandem with the lads to make sure we quickly establish a home track advantage”

We have an opportunity to be racing to the end of October and the boys know they are in a team that’s capable of winning trophies.

We would like to thank Warren (Scott) & Steve (Jenson) at Rye for making this possible and look forward to creating a team over time within an ever improving facility that provides the opportunity to take on and beat the rest and best of British Speedway”.

BMR’s Steve Jenson said, “Both BMR owner Warren Scott, and myself, are absolutely delighted to see league Speedway return so quickly to Rye House, and we welcome the Hammers and their supporters to our stadium.

We hope that the return of Saturday night action will also be well received by Rye House fans, too, and that they will come out in force to re-create the real party atmosphere we enjoyed in the early part of last season, as well as to build for the future.

The Hammers have a host of exciting riders in their ranks, including of course, our own Ben & Alfie, and they are still very much in the mix for the treble so we can all expect a fantastic conclusion to the season.”

More news regarding the Farewell to the Arena and Hello to the Hammers in the House will follow in the build up to the weekend of 14th & 15th.

Fixtures are already agreed for meetings against the Peterborough Panthers on Sunday 23rd and Saturday 29th and a reserved Play Off date of the first Saturday in October.