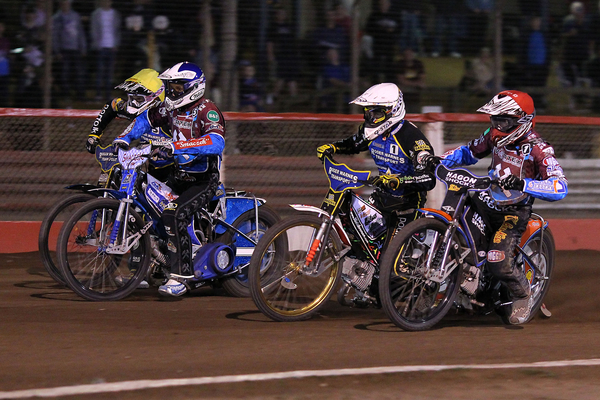 Tuesday provided a day of delight for the Lakeside Vortex Hammers, who sped to a home victory over the highly fancied King’s Lynn Stars live on Sky Sports and then received the very welcome news that Captain Davey Watt will return to action in time for the Club’s busy May programme.

The win over the Stars surprised many pundits, who predicted an away win, but saw all six Vortex Hammers riders in great form led by masterful performances from Peter Karlsson and Piotr Swiderski, whilst late signing Richard Lawson showed in his clashes with the rider he replaced, Richie Worrall, that he was a shrewd signing by the Essex based Club. Worrall, whose signing by King’s Lynn in the build up to the meeting, in the eyes of many, should have sealed victory for the Stars.

Meanwhile, the Vortex Hammers captain Davey Watt will remain in plaster for another week before traveling to Poland to make his return ahead of the Club’s visit to Coventry on 6th May meaning he will only have missed two meetings for the Club, due to the lack of fixtures caused both by postponements and the fortnightly running of the Grand Prix series. In addition to Tuesday’s match against the Stars he also misses Wednesday’s away match at Birmingham.

Further good news for the Vortex Hammers fans is that the home meeting with Birmingham will now be run on Friday 17th May giving the Club three consecutive Friday home meetings through May from the 10th to 24th. The 10th May will see the Peterborough Panthers visit the Arena Essex Raceway and the Coventry Bees will be in town on 24th May.

Tuesday’s match against the Stars saw the ‘Rider Replacement’ facility for the injured Vortex Hammers captain Davey Watt work for the Vortex Hammers as it yielded  nine points plus two bonus points from his four programmed rides. No.1, Peter Karlsson, was unbeaten in his opening four rides but finished at the back in heat 13 to finish the evening on an impressive tally of 12 points but the leading scorer was Piotr Swiderski who scored 13 points plus a bonus point from his six rides. These two were well supported by the remaining four Vortex Hammers riders with Lewis Bridger on 10 points, Kim Nilsson on seven plus three bonus points, Robert Mear on six points  and Richard Lawson on five points plus two bonus points.

The King’s Lynn Stars were effectively a four man team with Sebastian Alden failing to score and Nicolai Klindt managing just one point. They used the ‘Rider Replacement’ facility for the injured Simon Stead but his four programmed rides only resulted in two points being scored.

Their captain Mads Korneliussen headed their scorers with 12 points whilst their Grand Prix rider Niels Kristian Iversen scored nine points. Their remaining points came from Rory Schlein with nine points plus two bonus points and former Hammer Richie Worrall with eight points and one bonus point from his full compliment of seven rides.

The final result of 53-39 in favour of the Vortex Hammers was a fair indication as to the dominance of the home team and the vital three Sky Sports Elite League points gained from this victory has moved the Vortex Hammers up to  sixth place in the League table with matches in hand over several of the teams above them.