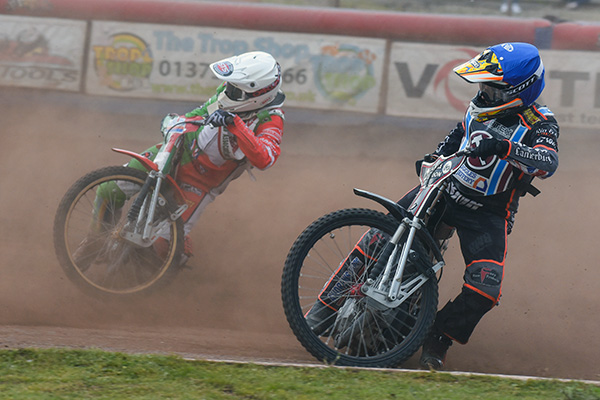 Lakeside went down 47-36 in an incident-packed encounter with local rivals Eastbourne at Arlington.

The Vortex Hammers left empty handed after an eventful meeting littered with falls in tricky conditions.

It was a tough night for the Purfleet outfit, although they remain fourth in the Travel Plus National League table as they chase a play-off spot.

After earlier rain created an extremely tricky Arlington track , the Hammers were still in contention for an away point after heat 13, but Paul Hurry was forced to retire with bike issues in heat 14,  resulting in a 5-1  to the hosts.

Captain Ben Morley and guest Danny Ayres returned the favour with a 5-1 in the nominated heat 15, but by then the chance of a league point was out of reach

Co-promoter Jon Cook felt his side “missed an opportunity” – but he knows their destiny is still in their own hands.

Said Cook: “Obviously conditions were a bit tricky, and I think that should have played into our hands a bit more than it did.

“We probably should have got a bit closer for that extra point which would’ve been a boost for our play-off quest.

But their lower order struggled with the tricky Arlington circuit as rider replacement failed to score a point in place of Alfie Bowtell.

The Hammers will head to Buxton for their final regular season fixture next Sunday, September 17 (3pm).