Ellis: We gave it everything. Comets v Hammers Report 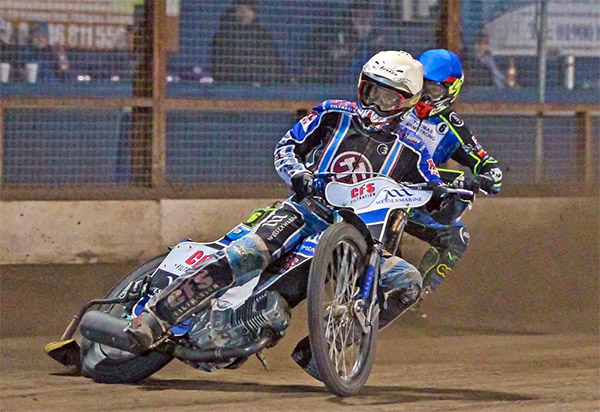 Adam Ellis admitted it was “devastating” to end the campaign trophy-less after missing out on the Championship Shield at Workington.

Having lost the Championship title at Derwent Park just 24 hours earlier, the Hammers were once again beaten by the Comets, losing 52-38.

That meant going down by 16 points on aggregate having lost the home leg by two points at Hoddesdon.

Ellis revealed: “It’s a hard one to swallow really. We’ve given it everything but just run into a Workington team who are phenomenal around their own track.

“We were dreadful on Sunday night as they hit us really hard in the early stages. We’ve been changing set-ups and everything we can to try and find something that works around Derwent Park, but it’s not been good enough.

“It’s been just as hard tonight. We’ve been a bit better out of the start but it was always going to be tough in this one because they were ahead from the first leg.

“Obviously we’re all gutted for the club and the fans. It’s devastating to come all this week and come away with nothing to show for it.

“I’m not making excuses but it’s been a hard year for us. The move to Rye House really affected us unfortunately.

.“We had a home advantage just as good as theirs so it would have been much closer, I’m absolutely sure of that.

“We also had the rain come down in the first leg of the Championship final which perhaps cost us a bigger lead as well when it was rained-off.

“It feels like everything has conspired against us a bit. But that’s not taking anything away from Workington who have clearly been the best team of the season.”

If the task was huge at the start for the Hammers, it was even more daunting as the Comets romped to a 10-2 lead after the opening two heats.

Richard Lawson then had to fight for four laps to pass home youngster Kyle Bickley but the home side were well in control and 14 points up after a Heat 8 maximum.

But when Nicolai Klindt and Bickley got away from Lawson in Heat 11, the writing was well and truly on the wall.

Finally the Comets put the Hammers out of their misery with a 4-2 in the next race over Adam Ellis to secure the Shield success.

The excellent Nick Morris, a class act from start to finish all night, gained two late 5-1s with Lawson to salvage some pride. But it was another tough night for the Hammers.

The second meeting in this double header – the last league meeting of the year – was abandoned after four heats and the result will not stand.