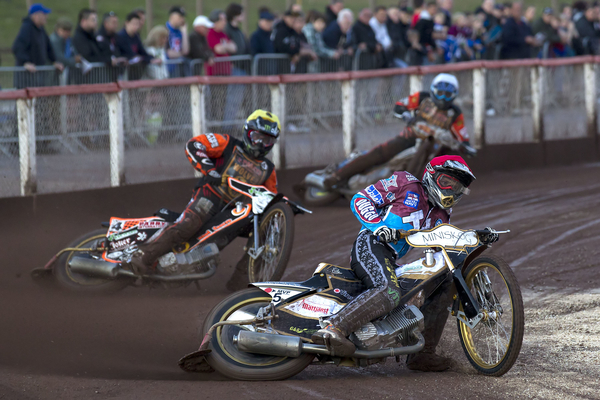 The Lakeside Hammers have a must win clash with Play Off rivals, the Peterborough Panthers, this Friday, 24th August, at the Arena Essex Raceway.

Both teams are well placed for a top four finish in the Sky Sports Elite League but the Hammers will need to take all three of the vital League points available if they are to keep their advantage over Friday’s opponents.

Jonas Davidsson will race for the Hammers in this meeting after declaring himself fit and has been backed by the Hammers Co Promoter, Jon Cook, in his attempts to return to form.

Jon Cook commented: “JD (Jonas Davidsson) is a class act and his form will return after his recent loss of it. He has changed his flights back to this Country to practice and he will have our complete support for the tough meeting against the Panthers. He is a specialist around our Raceway and I know that our loyal fans will give him great support.”

The Hammers go into Friday’s match against Peterborough having to use the ‘Rider replacement’ facility as they will be without both of their ‘Double Up’ riders, Kauko Nieminen and Stuart Robson, as both are due to represent their Premier League clubs at the Premier League Pairs meeting, which takes place at Somerset the same evening. Robson was also involved in a horrendous crash last Monday in the Club’s League match at Coventry, which was shown live on Sky Sports. He escaped relatively unharmed although he did suffer from some nasty facial injuries. The remainder of the Hammers line-up will be the same as that which beat Eastbourne last Friday at the Hammers Essex circuit.

Peterborough will be fielding their new signing, Tomas H Jonasson, at reserve. The Swede, who has had experience at Grand Prix Level, will be a key member of their side and, at reserve, they will be looking for a big score from him. The Panthers also include the new Danish Speedway sensation, Michael Jepsen Jensen, in their side. He was a member of the Danish team that won the Speedway World Cup last month.

Since the last visit by the Panthers to the Arena Essex Raceway in May, which saw the Hammers gain a 22 point victory, the Peterborough promotion have made a couple of team changes, which sees their two 2011 Poles, Krzysztof Buczkowski and Norbert Kosciuch, return to their side. This strengthens them, particularly at home around their big East of England Showground circuit, but it will be interesting to see how they perform around the tighter confines of the Hammers Raceway.

The Panthers also include in their side for Friday’s encounter two riders with connections with Rye House. Current Rockets rider Jason Bunyan, who competed in the opening Grand Prix of the season in New Zealand, is joined by former Rockets rider Linus Sundstrom.

Peterborough will, however, go into this vital match without their No.1, and captain, Kenneth Bjerre, as the Dane will be competing in the British Grand Prix, which takes place at the Millennium Stadium, Cardiff, on Saturday. They have booked in Belle Vue’s Australian, Rory Schlein, as a guest to replace him.

The action gets underway at the Arena Essex Raceway on Friday with the Grand Parade of riders at 7.45pm with the first of the 15 heats due to start at 8pm.

The ‘Kids for a Quid’ initiative continues for this match with the admission prices being £17 for adults, £14 for Senior Citizens, Students and Disabled, £12 for Unemployed and 17 and 18 year olds and children aged 6 to 16 inclusive just £1 with children under the age of six admitted free of charge provided they are accompanied by a paying adult. Proof of age or status may be requested.