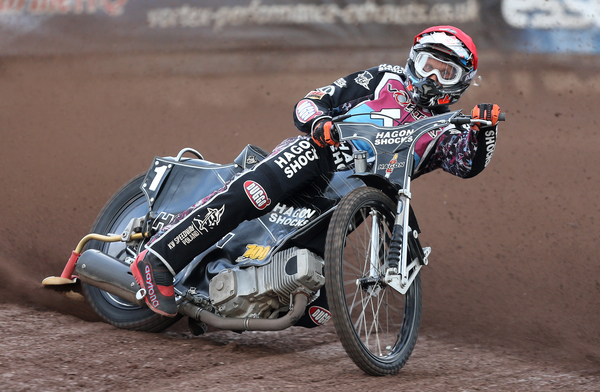 The Vortex Lakeside Hammers and The Coventry Bees shared the spoils in a pulsating and at times bruising 45-45 encounter in front of the Sky Sports cameras. Cheered on by a bumper home crowd, Hammers skipper Andreas Jonson took a last bend victory over Hans Anderson in the final nominated heat on a night of thrills and spills.

The meeting started in dramatic style when Stuart Robson ran out of room behind Mikkel Bech in a tight first bend. The former Hammer high sided hitting the deck, whilst Chris Harris laid his bike down to avoid his team mate.  Despite a call for all four back, Robson was unable to take his place in the line up, and was replaced by the Bee’s Jason Garrity.

The Elite Draft reserve gated, to then be passed by Bech on the exit of turn two. Returing the compliment on turn three, Garrity then got wildly out of shape, managing to stay on is machine. Jonsson steamed ahead to take the victory, whilst Harris swooped past Bech on the second lap.

Garrity then returned for his second race of a busy night, taking victory over Ellis in the first reserves race, whilst Adam Roynon, guesting for the Hammers stalked and eventually past Sarjeant for a shared heat.

Heat three was called back when Kennett hit the deck from first bend bunching. In the re-run Anderson led sharply from the gate whilst Kennett and King tussled for the single point at the back. The Hammers two point lead was quickly eradicated in the fourth, when Garrity steamed from the gate, with Kylmakorpi blocking all attempts to pass by Lawson to give the Bee’s a maximum 1-5 and their first advantage on the night.

With Robson withdrawn from the meeting following his first heat crash, Garrity again returned in the fifth. The first staging was called back with Sarjeant judged to have jumped the start. In the re-run Bech delivered a strong first and second bend to nulify the Bee’s threat, whilst Roynon slipped off on the third lap, landing awkwardly on his collarbone.

The sixth heat saw a great tussle between Harris and Kennett down the back straight on the second lap, with the British GP star taking victory, with Andersen in close proximity in third.  The Hammers levelled the scores in the seventh when Jonsson gated and former Hammers Captain Davey Watt, guesting for the injured Kim Nilsson, delivered a neat cut back on the second bend to deliver a Hammers 5-1.

Heat eight saw three re-runs, first after Sarjeant demolished the tapes, followed by Garrity jumping the start, before an alarming looking fall over his handlebars in the third running for Adam Ellis, after his machine shed a chain exiting bend 2.  In the fourth re-staging, Richard Lawson took victory for a shared heat.

The Bees then re-established their lead with Kylmakorpi and Garrity seeing off Bech and Ellis, who subsequently withdrew from the meeting.

Kennett returned the earlier compliment on Harris in the following race, with a fantastic ride to snatch the lead from the Cornishman on the third bend of lap three, whilst Sarjeant initially kept Watt honest for third.

The Hammers then took the lead again in the eleventh, after King hit the fence on the second bend of the third lap, whilst chasing Jonsson. With the race awarded, and Bech given second, the Essex team sneaked a two point advantage.

The Bees quickly clawed this back with a 1-5 in the second reserves race, from Garrity and Sarjeant over Adam Roynon,  who bravely rode for four laps with a dislocated collarbone following his earlier spill.

Andersen gated in the thirteenth, and was joined by Harris by the end of the first lap, before Jonsson found a gap on the back straight of the second lap to reduce the arrears to a 2-4 to the Bees.  Still four points adrift, Kennett and Lawson then teamed up for maximum heat advantage over the hard charging King, despite Kennett causing worry for the home support after nearly coming to grief on the second bend of the last lap.

With the scores now even, heat 15 delivered a dramatic last heat decider. As Anderson gated, Jonsson slipped into second whilst Harris got the better of Kennett on the exit of the second bend.  Jonsson first aimed to slow down Harris to give Kennett a chance to overtake, before then turning his attention to Anderson, closing the Bee’s Number 5 down on the last lap, before capitalising on a slight mistake and snatching victory on the line to the jubilation of the home support.

“We couldn’t have asked for more, a crowd of 2000+, fantastic speedway, a last heat decider, a race to the line and all in front of our local MP Jackie Doyle-Price. Tonight was probably the most important and successful night in the clubs history, and we send our thanks to all the fans who turned out to support the club.  Our fight to survive has taken a huge step forward tonight”

Updates courtesy of @lakesidelive and @speedwayupdates. Give them both a follow.