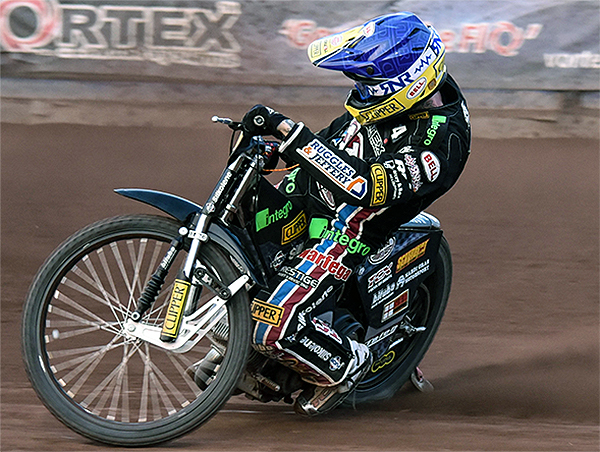 Lakeside fell just short of a consolation point as they slipped to a 50-40 defeat against Belle Vue at the National Speedway Stadium.

The Vortex Hammers put in another battling away performance against the highly-rated Aces – but they were unable to repeat last Saturday’s last-gasp victory at Leicester.

They were level after eight heats but conceded a costly 5-1 in the penultimate race as they missed out on the chance to add to their Elite League points tally.

Team coach Kelvin Tatum admitted they were disappointed to leave Manchester empty-handed, although he was keen to look at the positives after another encouraging display on their travels.

Tatum said: “It was a spirited display but it wasn’t quite enough to pick up that all-important league point which was disappointing.

“It’s a case of déjà vu truth as we’ve been in a similar position on more than one occasion away from home and haven’t got the points to show for it.

“It’s difficult to criticise because we did compete very well, and we weren’t far away at all, but it would be nice to turn some more of these good away performances into hard-earned league points.”

Kim Nilsson contributed paid 10 in the No.5 spot with a solid showing, but with Andreas Jonsson proving solid yet unspectacular at No.1 the visitors only managed three race wins.

One of those came from Richard Lawson, who struggled to build on a superb ride in heat three, whilst Lewis Kerr fought hard for little reward in the middle order.

After a busy spell, the Purfleet outfit will have a chance to regroup before returning to action against Swindon at the Abbey on Thursday, June 16 (7.30) then hosting the Robins in the return fixture at the Arena-Essex Raceway 24 hours later.