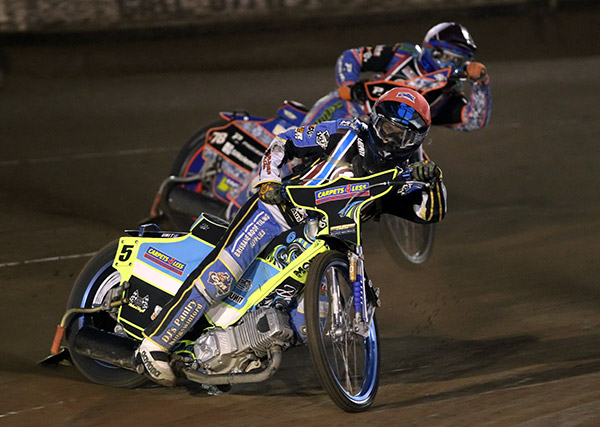 Lakeside ace Nick Morris says his side will be racing for pride tonight in their last shot at silverware this season.

They took a 61-29 beating from Workington in the Championship Grand Final yesterday to lose by 22 points on aggregate.

This evening they are back at the same Derwent Park venue — and face an uphill struggle as they begin the Shield Final second leg trailing by two points.

“We’ve seen what they’ve been doing to most teams that come here,” admitted Morris, whose considerable efforts in last night’s match yielded only five points.

“They’re just too good round this place. We thought we’d be able to put up a fight, but, yeah — they’re just quick, that’s all.

“We didn’t get the bikes set up as they do. We just couldn’t keep up, really.

“We’ll come back and try to race for a bit of pride. But we’ve got nothing to be ashamed about. We made it this far and, like I said, Workington are a really good team.”

Team boss Will Pottinger reckons the Hammers can at least learn from their experience in terms of preparation.

“We’re in a Grand Final and we haven’t raced here all year — a bizarre situation,” he said.

“At least we’ve got a bit of an idea as to where we’ve got to start from, bike set-up wise.

“We’re not going to give up. We’ll keep fighting.”

Hammers are unchanged while Stefan Nielsen guests for the Comets in place of the injured Dan Bewley.