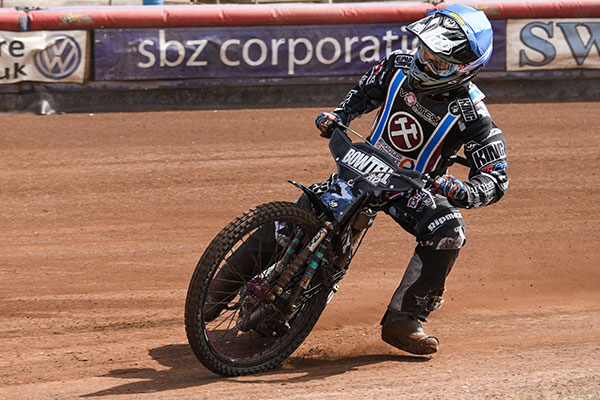 Lakeside  maintained their unblemished home record with a 44-33 win over Mildenhall in a meeting cut short after 13 races.

Heavy traffic around the Thurrock area saw the start delayed by 45 minutes to allow supporters extra time to get to The Arena-Essex Raceway.

The action got underway in dramatic fashion as just two riders completed the opening race. Vortex Hammers Guest No.1 Steve Boxall finished ahead of Mildenhall’s Connor Mountain after both Connor Locke and Luke Ruddick had fallen and retired from the heat.

Home reserve Locke fell again in the second heat – this time along with team-mate Alex Spooner. That gifted the opposition a 5-1 maximum as the Suffolk men gained the early advantage.

But Guest Tom Bacon and Alfie Bowtell combined for successive 5-1s of their own in their opening two outings to get the hosts back in front.

The gap remained at just five points with seven races gone, but a streak of three consecutive heat advantages saw the Hammers open up a 13 point lead.

That was reduced to 11 with two races to go before newly crowned British 500cc Youth Champion Drew Kemp crashed heavily for the visitors in the penultimate heat.

With extensive work needed to the safety fence, the decision was made by SCB referee Phil Griffin to abandon the meeting with the result standing.

While reserve pairing Connor Locke and Alex Spooner have had smoother nights, Lakeside regulars Alfie Bowtell and Paul Hurry alongside guest duo Tom Bacon and Steve Boxall mustered up nine race wins between them as they all charged to double figures.

Bowtell registered a paid maximum against his former employers on what he described as an important night for the Hammers.

“It was a shame we started a bit late and a shame that the meeting was cut short, but overall it was a good win for the team,” Bowtell said.

“Me, Paul and the two guests really pulled our weight tonight and that was important – especially being without Nick (Laurence – food poisoning).

“To score a paid max against Mildenhall was really pleasing for me – now we move on to the next one.

“It was an important win tonight with how close it is in the table, but now we need to go and get something from our away meeting at Plymouth next Friday.”