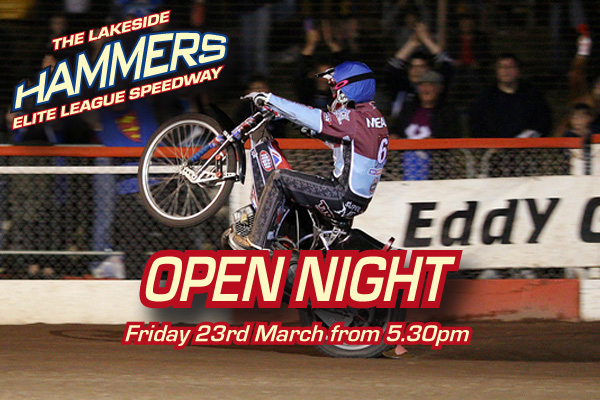 The Lakeside Hammers will open the doors of the track to their fans on the 23rd March, offering a behind the scenes look at the club, as it makes its final preparations for the 2012 season which starts 7 days later with the Hammers first home meeting against the Belle Vue Aces.

In a move away from the normal Press and Practise day, fans will be given access to the track, pits, centre green and a tour of the referee’s box, as well as watching the organised practise of the first team and the debut of the new Anglian League team, the Junior Hammers.

Hammers Co Promoter Jon Cook commented “From 6pm fans will be able to get on the track and be given a guided tour courtesy of track manager Gerald Richter, the pits will be open for fans and at 7pm before practise starts, there will be a photo session in the pits for fans to get their own team and favourite individual rider shots.

When practise begins we will have a special fenced safety area on the centre green, which will be open for all fans to enjoy a very special view of the racing, a view which is normally only open to only a privileged few.  We will have the ref’s box open for a tour and plan to have a local referee on hand to explain their duties on the night.

Our first team will undertake some competitive racing on the night, as well as establishing a new flying lap record and we will also welcome the new Junior Hammers into action with a match against either Ipswich or Kings Lynn.  The 2012 team mechanics will also be put through their paces with a back wheel changing competition, whilst our new merchandise team will have a stand with official club merchandise, where fans can place orders for the 2012 range, including the new 2012 team shirt.

We will be raising money all year to renew our air fence so the cost for the evening will be £5 for adults and £1 for kids with free admission for season ticket holders. Rather than just watching Press and practise from the usual viewing places, we plan to give our fans a great fun night, a fantastic view and the opportunity to rub shoulders with their team as we set up for a year of great anticipation”.

Tweet
« Rico targets No.1 return » Rico’s up for the Ben Fund