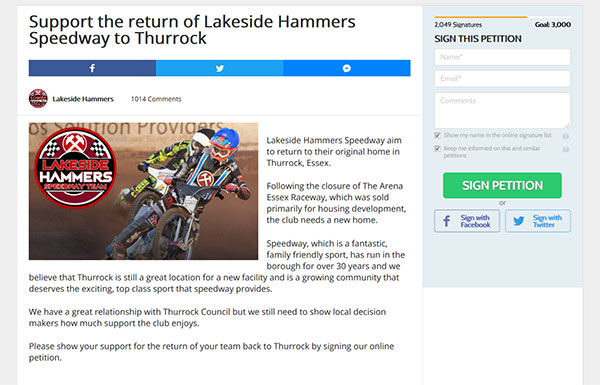 The petition, part of a campaign to show support for the Hammers, and their aim to return to Thurrock, has been signed by Hammers stars such as former Skipper Davey Watt, Jonas and Daniel Davidsson, Piotr Swiderski, Kim Nilsson and Ben Morley along with many local fans from within the borough and speedway fans from across the country and world.

Hammers Co-Promoter Jon Cook commented “The response to the petition has been simply phenomenal. To reach over 2000 signatures already really shows the depth of support for the club’s return to Thurrock, and we would like to thank every single person who has signed so far.”

The petition also includes over 1,000 comments, all of which are personal messages showing just how much the return of the Hammers and the sport to Essex means to people.

We would also like to express our thanks to the local media who have also helped us to push the message so far including BBC Essex Sport, BBC London Sport, Radio Essex , Time 105 FM and The Thurrock Independent.”

The petition can be signed by clicking here

In addition, fans can also send a written letter showing their support for the Hammers to the Head of Planning and Regeneration at Thurrock Council – a draft letter to download can be found in the campaign section of the site here.