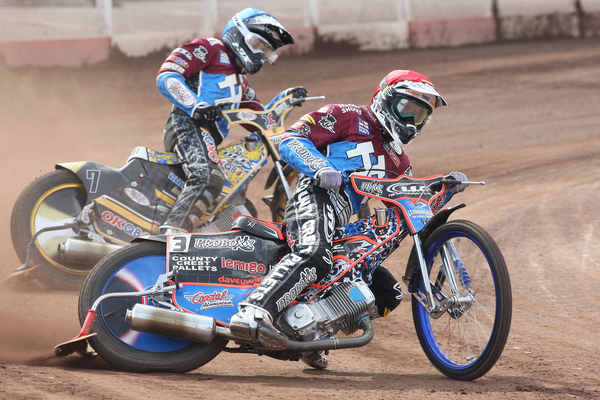 The Elite Knockout Cup takes centre stage as does Saturday night racing at the Arena Essex Raceway this weekend, as the Lakeside Hammers take on the Coventry Bees in the second leg of the revamped competition 24 hours after the first leg on Friday at the Bees home track in Brandon, Warwickshire.

The Hammers will be led into action by Davey Watt who has moved to No.1 in the team after an excellent start to his Essex career, which sees him now sitting on an impressive 8.84 average. The Hammers also call upon the in form Justin Sedgmen at reserve for the home leg as Richie Worrall is away racing in the World Under 21 Championship. Young British rider, Ashley Birks, is brought into the side for the trip to Brandon.

The Hammers Co promoter Jon Cook commented: “The Cup has been lucky for us in the past and the revamped formula will add to the attraction of the event. We are offering kids admission at just a quid courtesy of our partners Ruggles and Jeffery and I would like to thank them for their support of this venture. Saturday night racing is always something special at our Raceway and I’m sure we will all be in for a great evening’s entertainment.”

Coventry will be led by the sole British rider in this year’s Grand Prix rider series, Chris Harris, along with fellow British international Edward Kennett. Unfortunately for the Bees their third top British rider Scott Nicholls was injured in a match earlier this week and will miss this Cup tie. However, another British rider, Adam Roynon, will be in their side. Completing the Bees line up will be young Aaron Summers from Australia plus Danish riders, Henning Bager and Kenni Larsen. Bager is a former Hammer and was a firm favourite of the fans during his time with the Essex based club.

The parade of riders is scheduled for 7.45pm and the first of the 15 races at 8pm.

Admission prices for this Elite League Knockout Cup match against Coventry this Saturday, 2nd June, are: Adults – £17, Senior Citizens, Students and Disabled – £14, Unemployed and Children aged 17 and 18 – £12 and children aged 6 to 16 inclusive – just £1 under the ‘Kids a Quid’ scheme.

Children under 6 will be admitted free of change provided they are accompanied by a paying adult. Proof of age or status will be asked for at the pay booths. Tickets will be available on the evening from the pay booths but they can also be purchased in advance online via the Lakeside Hammers website at www.lakesidehammers.co

Tweet
« Australia progress to U21 final » Hammers return to the top