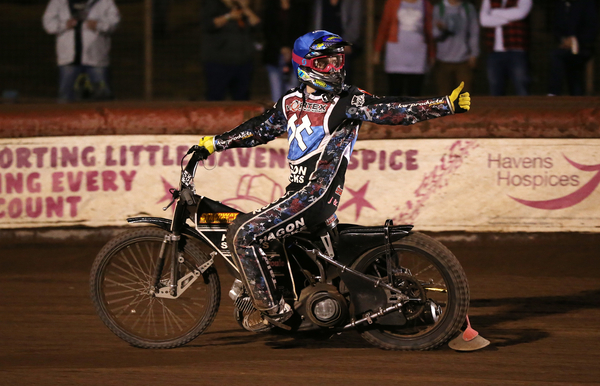 The Vortex Hammers season ended in controversial circumstances with the team drawing their last home match with defending Champions Poole.

Led by the ever charging Lewis Bridger in heat 15, who with less than half a lap of the home season left pulled off an incredible passing move on Peter Kildemand who promptly lost his chain allowing newest Hammer Danny King to grab second place. That Kildemand was even in the re-run was hotly disputed by the home side, with the Referee Mr Carrington making an inexplicable call to allow him in the heat, even though he wasn’t under power when the orginal race was stopped.

Hammers team manager Neil Vatcher commented “I was absolutely fuming as the race restarted and though it still doesn’t forgive such a poor decision, justice was done on that last bend and it was a draw that really felt like a win to us and judging by the reaction in the Poole pits, a defeat to them.”

Hammers Co-Promoter Jon Cook added “We’ve enjoyed a fantastic season of excitement and great racing at the Raceway  and though we’ve come up short in the League, I can’t fault the riders for their efforts of late. Ultimately defeat at home to Coventry came too late in the day to recover from, but we’ve finished the year with predominantly a young team of chargers and our time will come.”

The team will complete it’s Elite League fixtures away at King’s Lynn on Tuesday 16th September and will gather for it’s end of season dinner dance on November 1st at the Thurrock hotel.  Further ticket details will be provided.