Hammers take on the champions 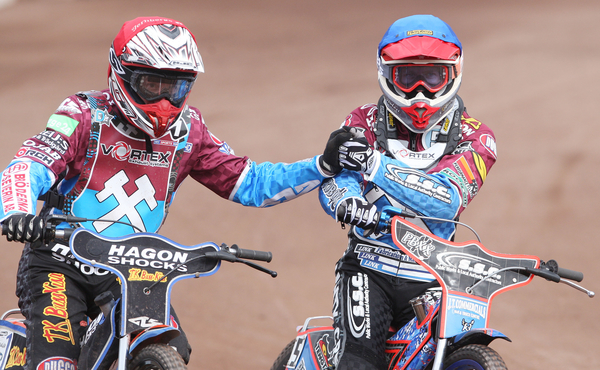 The Robins have already made an impressive start to the year taking the Elite Shield from the Poole Pirates and are favourites to retain their League title. The Vortex Hammers Co Promoter Jon Cook commented: “It’s a very exciting meeting to kick off our Friday night home season and although it’s still very early in the year for both teams it’s sure to be a very tight and exciting affair.

Our boys will need to be on their best form to take the result.” The Vortex Hammers line up for the clash against the Robins with the same seven riders who raced to a nine point victory in the home match against the Eastbourne Eagles on Good Friday. That match saw all of the Hammers riders pick up vital points in a good all round solid performance and they will need to repeat that if they are to see off the Robins. Swindon will be led by the Danish former Grand Prix rider Hans Andersen along with his fellow Dane Peter Kildemand.

Completing their top five will be former Eastbourne, Poole and Coventry rider Edward Kennett, who joined the Robins over the winter, and the current Australian Champion Troy Batchelor. They will be using the ‘Rider Replacement’ facility for Aussie Nick Morris as he has to ride for his Premier League side, Somerset, who have a home match against Ipswich the same evening.

Similarly they will also be missing one of their reserves, Ashley Birks, who will be riding for his Premier League side, Scunthorpe, who are at home to Sheffield. His place will be taken by a guest and the Swindon Management have chosen Steve Worrall, who rides for Newcastle in the Premier League.

Their other reserve is Polish rider Kacper Gomolski, who last rode in this County in 2011 when he appeared in the colours of Peterborough. The ‘Kids for a Quid’ offer for the Easter holidays again applies courtesy of Ruggles & Jeffery, which will see children aged six to sixteen inclusive admitted to this meeting against Swindon for just £1.

The other admission prices are: – £17 for adults, £14 for Senior Citizens, Students and Disabled, £12 for Unemployed and 17 and 18 year olds and children under the age of six admitted free of charge provided they are accompanied by a paying adult. Proof of age or status may be requested.

All tickets may be purchased on the night but, alternatively, they are also available in advance online via the Club’s website at www.lakesidehammers.co The action gets underway at the Arena Essex Raceway on Friday, 5th April, at 8pm with the Grand Parade of riders scheduled for 7.45pm.