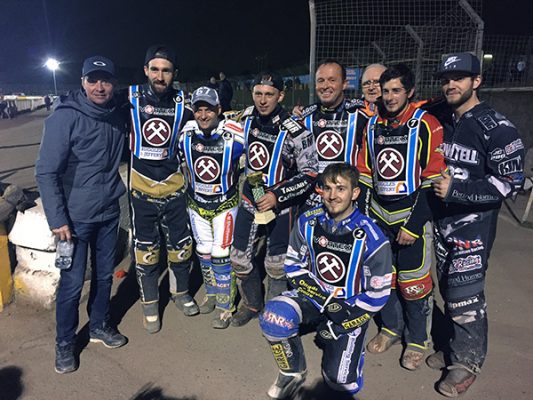 The Vortex Lakeside Hammers rounded off their challenge fixtures as they beat Kent 47-43 at The Arena Essex Raceway.

It wrapped up a 93-86 aggregate triumph against the Kings as the Vortex Hammers sealed the Tunnel Trophy.

It means Lakeside have won three out of their four matches and Team Manager Kelvin Tatum has described the meetings as “very beneficial” ahead of their National League opener away to Cradley at Wolves on Bank Holiday Monday (May 1).

Said Tatum: “Tonight was another good meeting for us and it certainly had everyone in the stadium on tenterhooks for its duration.

Kent kept us very honest and kept us on our toes but the 4-2 in Heat 14 from Alfie Bowtell and Jamie Couzins was very timely indeed.

It’s three wins out of four altogether and two out of two on home shale so we couldn’t ask for much more overall!

These four challenge fixtures have been very useful for everyone involved with the club this year.

You always learn the true facts about individuals when they’re in a true racing scenario and a competitive environment.

Everyone will learn with every ride and every meeting they do and that’s part of the excitement in this league.

There are plenty of positives to take from these four meetings – now bring on the Heathens at Monmore Green at the start of next month!”

Hammers No.1 Ben Morley continued his super early season form while club favourite Paul Hurry performed like he’s never been away, scoring double figures and recording two race wins on his first appearance in the claret and blue for seven years.

David Mason contributed four solid second places while Alfie Bowtell and George Hunter both put in improved, encouraging displays. Jamie Couzins again did his job at reserve while it was another night of learning for Nick Laurence.