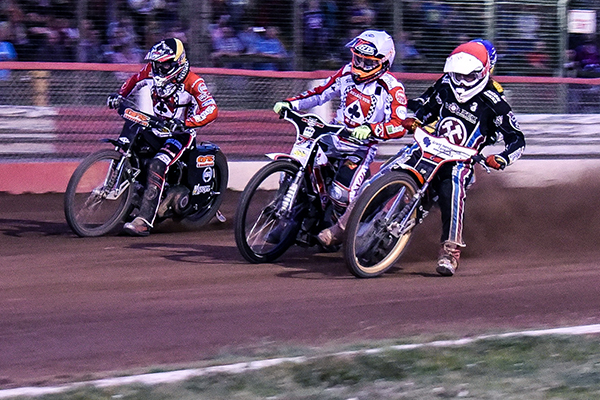 Lakeside host Belle Vue on Wednesday in the first leg of their mouth-watering play-off semi-final at the Arena-Essex Raceway (7.30).

The Vortex Hammers sealed their place in the end of season competition thanks to a 58-35 home win over Swindon in their final league meeting of the campaign last Friday.

Club coach Kelvin Tatum says he is proud that the Hammers made the Elite League top four, but is now challenging his riders to ‘surprise one or two people’ when it matters most.

Said Tatum: “Naturally, to give ourselves the best opportunity possible, we need to make the most of our home advantage and build up as big a lead as we can ahead of Monday’s trip to the National Speedway Stadium.

If you go on the ‘A’ fixtures, we would have actually won on aggregate and that shows we’re more than capable of being able to pull this off.

It’s going to take a huge team effort over 30 races but I think we’re in for a cracking semi-final tie. Hopefully our supporters turn out in big numbers and give the riders plenty of vocal support!”

The Hammers will operate rider replacement at No.1 for club captain Andreas Jonsson after finding their guest options limited by rider availability.

Belle Vue are at full strength and include Scott Nicholls and Craig Cook as well as Slovenian Grand Prix star Matej Zagar.

Admission details (available at the gate)

Tickets can be purchased from the Social Committee who will be positioned on the 1st bend near the Raceway Tavern up to 15 minutes before the first race on Wednesday.