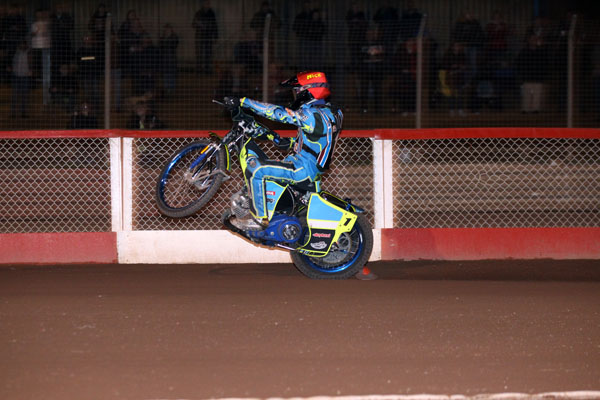 Powerful Lakeside got their SGB Championship campaign off to a perfect start with a convincing 56-34 win over Redcar at the Arena-Essex Raceway.

Will Pottinger’s side were never threatened as they roared to 14 race victories and a comfortable three league points.

It was another step in the right direction for the Hammers to continue their excellent start to life in the second tier – and Pottinger declared himself happy with a job well done.

“Obviously it was another good night for us,” Pottinger said. “It’s great to start our league campaign with a big home win, and also sending the opposition home empty handed as well.

“We had 14 race winners and all the top five scoring paid double figures, so it was a powerful performance and we couldn’t ask for much more really.

“We’re starting to lay the foundations for a dominant season at home, and that’s something we’re extremely happy about.”

But they were backed up magnificently by Adam Ellis, Kyle Newman and Ben Morley, with Ellis suffering just one defeat and Newman capping off a double figure score with a heat 15 victory.

He was joined in the final race by Morley, who also bagged 9+2 points with a battling display.

Zach Wajtknecht also won heat two with a useful showing at reserve, and although lower order partner Alfie Bowtell struggled, the Hammers had more than enough firepower for victory.

Pottinger’s side will now face a run of three straight away fixtures, starting at Ipswich in the Championship Shield on Saturday (7.30).

A win at Foxhall could secure progression to the semi-final stage of the competition – and Pottinger has called on them to pick up where they left off to earn their second win of the year against the Witches.

He added: “We’ll go to Ipswich with a lot of confidence, and we know a good result will put us in with an excellent chance of progressing from our group.

“We’ve had three good wins at home so now we’ll be looking to do the business away, and hopefully tonight’s result can fill us with the confidence to go there and win.”

Tweet
« 4.45 UPDATE: ALL SYSTEMS GO! » Hammers progress through to Semis