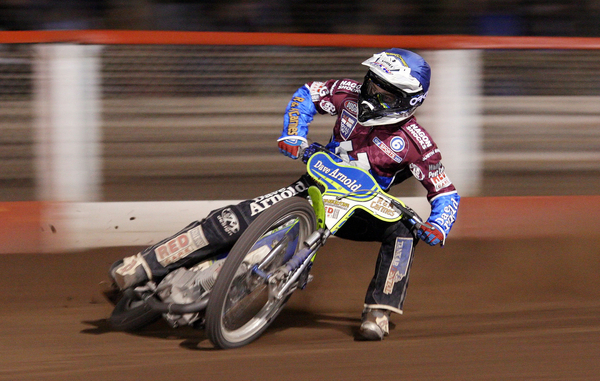 The Lakeside Hammers take on play off rivals the Birmingham Brummies this Friday night, 6th July, at the Arena Essex Raceway in a meeting crucial to both clubs Elite League aspirations.

The Hammers will give a seasonal home debut to Swedish International Jonas Davidsson and injury to free scoring reserve Richie Worrall means a long run in the team awaits young Aussie Justin Sedgmen.

The Hammers Co Promoter Jon Cook stated: “Richie’s (Worrall) injury is a blow to us just as JD(Jonas Davidsson) brings us up to full strength but this really is Justin’s (Sedgmen) chance to shine. Everyone at the Club has been impressed with his patience in playing second fiddle to Richie and his performances at home have been terrific so now he has the chance to build on that form, starting Friday.”

With the new July averages now in use Robert Mear moves up into the top five for the Hammers joining Jonas Davidsson, Peter Karlsson, Davey Watt and Kim Nilsson. Mear’s elevation into the top five means that Kauko Nieminen drops down to reserve alongside Justin Sedgmen.

The action gets underway at the Arena Essex Raceway on Friday with the parade of riders at 7.45pm followed by the first race at 8pm. Following the 15 heats of Elite League action there will be a further six heats that will see the Young Hammers take on the Rye House Pocket Rockets in an Anglian Junior League match.

Normal admission prices will apply, which are: Adults – £17, Senior Citizens, Students and Disabled – £14, Unemployed and Children aged 17 and 18 – £12, Children aged 6 to 16 inclusive – £3, with children under the age of six admitted free of charge provided they are accompanied by a paying adult. Proof of age or status may be requested.

Tickets may be purchased on the night at the paybooths or in advance online at the Club’s website at www.lakesidehammers.co

Tweet
« Richie Worrall update » No luck for Hammers in Wiltshire