Kerr keen for the off 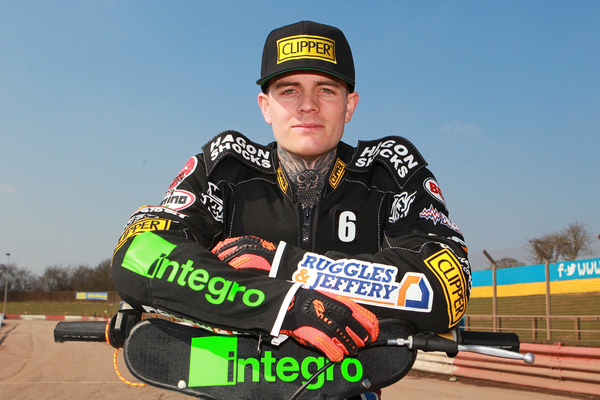 Lakeside Vortex Hammers reserve Lewis Kerr is keen to make the most of his first competitive laps at his new home circuit in the Spring Trophy on Friday (8pm). Following press and practice at the Raceway, the talented British racer will make his first appearance at the Arena-Essex Raceway since signing for the Hammers over the winter.

Despite being sidelined since August following his horror crash in the Premier League Fours at Peterborough, Kerr says he is “feeling better than ever” heading into the new campaign.
After already getting plenty of pre-season laps under his belt, he is hoping to put in a strong performance to begin his Hammers’ career.

“I’m feeling better than ever coming into the new season, and I’ve had plenty of time on the bike already which is great,” said Kerr.

“I’m just looking forward to starting racing now and easing my way in as I get back to full race sharpness. The Spring Trophy meeting at Lakeside will be a good chance to get some laps in around my new home track, so hopefully I can hit the ground running with a good meeting there.

I’ve gone quite well at Lakeside in the past and I’m looking forward to having it as my home track. It can be quite tricky to get to grips with but getting those laps early in the season will be important.

Hopefully by the time the Elite League meetings start I’ll be up to speed and we can get off to a winning start, because I think we have a team that can do well this year.”

Kerr will face stern competition from his 2016 Hammers’ team-mates alongside numerous other riders with Lakeside connections in the 12-man individual event.

It promises to be an entertaining night for supporters to kick-off the new season as they have the chance to walk the Arena-Essex Raceway track and take part in a photo and autograph session at 7pm before the racing gets underway.

To read the full interview with Kerr, get your hands on the official raceday programme available for £3 on Friday night.

Admission at the turnstiles on the night:
Adults £15, Concessions £10 and kids up to the age of 16, free of charge.