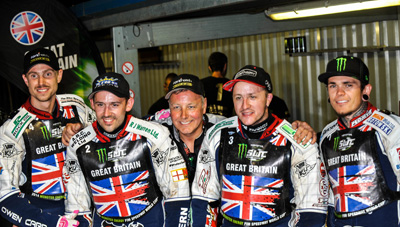 Triumphant Team Great Britain boss Alun Rossiter was delighted to see his side silence their doubters as the Lions roared into their first Monster Energy FIM Speedway World Cup Final since 2010.

Team GB triumphed on 44 points in Event 1 at King’s Lynn tonight, seeing off a spirited challenge from the USA, who finished second on 37. Luckless Australia were third on 36, while Italy were eliminated from the competition after finishing fourth on 10.

The Lions join hosts Poland in the Monster Energy SWC Final Bydgoszcz on Saturday, while the USA and Australia contest the Race Off at the ZKS Polonia Stadium on Thursday, where they meet the second and third-placed sides from Event 2 at Vastervik on Tuesday.

Rossiter went into the tournament riled by those who put his riders down and doubted their chances of victory. So he was elated to see Tai Woffinden (12), Danny King (11), Chris Harris (11) and Simon Stead (10) all rack up double-figure returns and give him the perfect start to his reign as national team manager.

He said: “We’ve got to be happy with our first Final since 2010. I genuinely believed and I always said we could win it. I said from day one that this wasn’t a dream – it was do-able.

“I just wanted to give the boys a bit of belief because everyone keeps putting them down. They proved everyone wrong.

“People were saying Steady shouldn’t be in it or Danny King or Bomber. They said it should be Tai Woffinden and a load of youngsters. But these lads showed what they could do for me.”

Pre-meeting favourites Australia were beset by bad luck and suffered two engine failures and three exclusions in an event where the margin for error is always slim.

The epitome of their misfortune was FIM Speedway Grand Prix star Darcy Ward’s exclusion when he stopped after he thought he saw a red light on the fourth bend in heat 18.

But Rosco says the Aussies’ bad luck didn’t hand the meeting to his team on a plate.

He said: “Some will probably say I was lucky or something like that! But we were in front when everything was going wrong for Australia.”

Asked what he feels his side can achieve in the Final, Rosco refrained from putting any pressure on his charges. He said: “Anything is a bonus now. Nobody gave us a cat in hell’s chance and they all thought we were just going to the Race Off. So let’s just go and enjoy that Final.”

Double world champion Greg Hancock scored over half of the USA’s 37 points with a colossal haul of 19. But the American dream was boosted by a sensational nine points from FIM Speedway Under-21 World Championship finalist Gino Manzares, five from Ricky Wells and four from debutant Max Ruml.

USA boss Billy Hamill was delighted to pip Australia to second place as his young team exacted a small measure of revenge for the Roos’ triumph over them at last year’s Race Off in Prague.

He said: “It really doesn’t mean anything as far as the competition goes, but it’s a pretty big feather in our cap. We just lost out to the Australians in Prague last year. We ran them pretty tough. So I’m extremely happy to get a result today.

“The young kids I took a gamble on definitely repaid my faith in them. I’m very happy.

“We’ve got a really good chemistry with Greg as captain, inspiring these young kids. Everyone is a pleasure to work with. It’s such an exciting time for American speedway.”

Aussie team manager Mark Lemon hopes to have 2012 world champion Chris Holder back in his side for the Race Off after he was forced to withdraw from the King’s Lynn round.

Holder has been sidelined with a broken wrist and fractured neck since June 20, but Lemon is confident he will return for what he knows will be a tough fight for the last berth in Saturday’s Final on Thursday night. He said: “A lot depends on Chris and his fitness. He’s feeling pretty optimistic he’s going to be fine. So we go to the Race Off with the expectation that we have Chris in the team.

“If you recall 12 months ago, the Americans pushed us very hard in the Race Off and we only just got away with a win last year. The Race Off is a gamble; it always has been. It’s a risk we would have quite honestly chosen not to take. But we’re there. Let’s go race!”

The Monster Energy SWC moves to Sweden next when the host nation meets Denmark, Latvia and the Czech Republic at Vastervik on Tuesday.