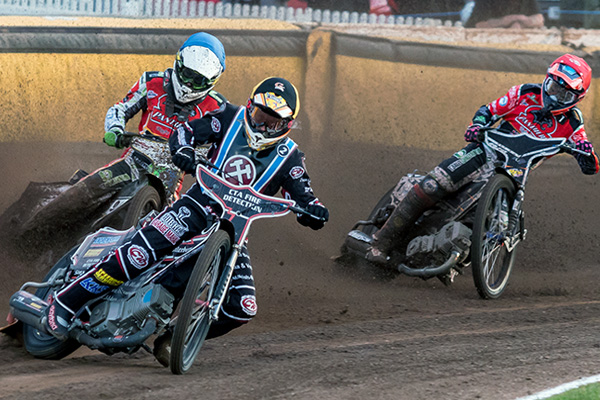 Super Scott Nicholls, the man Lakeside ALMOST bagged during an eventful off-season, appears at the Arena Essex Raceway with the Peterborough Panthers on Friday (8pm).

Nicholls, one of British Speedway’s greatest riders in the modern era, was lined up for a switch to the Hammers but the move was scuppered by controversial rules.

Peterborough then pinned their hopes on getting their man and on the eve of the season their patience paid off when he was ruled eligible to race in the Championship.

It means Friday’s Shield clash has added spice and a big crowd is set to turn out for the action with, finally, a break in the wet weather.

Hammers boss Will Pottinger admits he’s always been a Nicholls fan – but he’s keen to see his side put one over the Panthers!

“Scott is always tremendous to watch and the fans are in for a treat on Friday night,” he said.

“His battles with our top riders like Nick Morris and Rich Lawson will be worth the admission money alone.

I’m happy with my team and we are just desperate to get back out there racing after the Easter programme was washed out.

We need to win this. We picked up a point at their place and now we have to build on that by getting three points at home and if we can do that I believe we have a great chance in the group.

We also need to try and stop them claiming a point for a close score so there’s everything to race for.”

The Hammers Merchandise Partners ImageOn will be positioned at the entrance of the Pits prior to each meeting, until the start of the first race, for anyone wishing to collect or place orders from the Hammers merchandise range.

Meanwhile the Hammers have rearranged their home Shield clash with Ipswich for Friday week, April 13 (8pm).

Away fixtures (at Ipswich) have also been confirmed, with the Championship Shield clash now taking place on Saturday 21st April, with the fixture on the 3rd of May reverting back to the Knockout Cup clash.

Gates open at 6pm with the pits open to all until 7.15pm.

7 years and under free