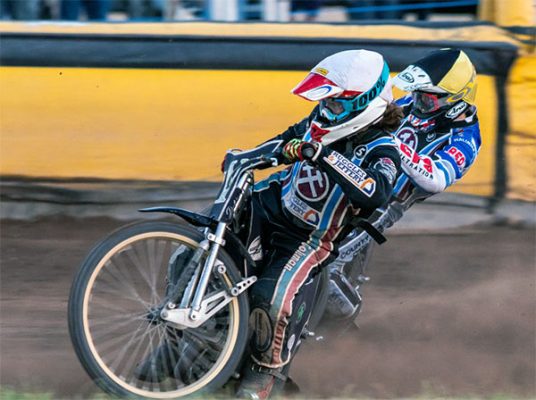 Lakeside face a 14-point deficit after the first leg of their KO Cup quarter-final having lost 52-38 at Peterborough on Sunday.

The clash at the East of England Arena was the only match raced on the day after the planned afternoon opener at Hoddesdon fell victim to the weather, and it means the Hammers know the size of the task when the return takes place.

They were certainly hit hard by their absences, with the loss to injury of Kyle Newman and Zach Wajtknecht proving costly against a solid-scoring Panthers side.

Newman’s rider-replacement outings accrued just three points, all from a Heat 14 win from the classy Adam Ellis, whilst Broc Nicol struggled as Wajtknecht’s replacement and failed to beat a home rider.

The story of the meeting was that the Hammers heat-leaders won a string of races – but it was the Panthers who maximised their own victories.

In fact, after eleven races the home side had seen their riders take the flag just four times, with all of them being in 5-1 heat advantages, so they led by 14 points.

That was frustrating for Lakeside, for whom Ellis, Richard Lawson and Aaron Summers all won two of their first three rides, but each also suffered a 5-1 concession.

But their only success in the lower-order came in Heat 8 when Alfie Bowtell raced to an impressive victory, holding off Simon Lambert and Emil Grondal for a 3-3.

Trailing 44-28 after Bradley Wilson-Dean shot inside Ellis to win Heat 12, Hammers had high hopes that Heats 13 and 15 would allow them to significantly reduce the deficit.

Hammers boss Will Pottinger said: “We had nine heat winners but twelve last places, so unfortunately there was no back-up for the heat-leaders who were winning races.

“It’s not un-doable by any means, but we do have a bit of a mountain to climb in the second leg whenever that may be.

“But if we learn lessons from it and put them into practice over the next two weekends, then it will still have been a worthwhile exercise.”

The two sides meet again next weekend in the semi-finals of the Championship Shield, with the first leg at Hoddesdon on Saturday September 29 (7pm).