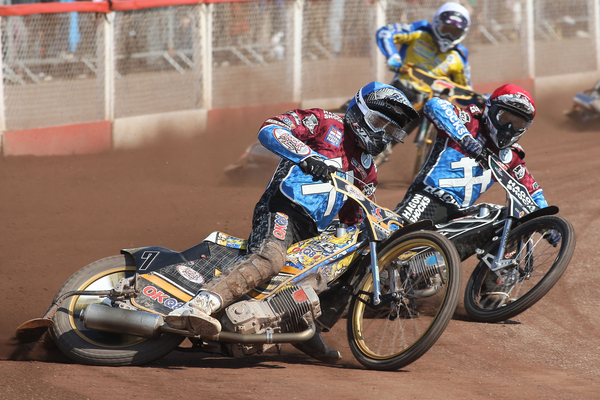 Jensen has set British Speedway alight in the opening weeks of the season and has been a major factor in his club’s unbeaten start to the year, which has confounded the predictions of most pundits. The Hammers have won all three of their Sky Sports Elite League matches to date and buoyed by a terrific away win at Eastbourne, their first since 2007, they will be out to lower Jensen’s colours and keep their 100% record in tact in a meeting that promises to be an early highlight of the season.

The Hammers Co Promoter Jon Cook commented in the build up to this keenly awaited match: “I have been told by several of my promoting colleagues just how special Michael is and he certainly has fired Peterborough’s season. It’s always exciting to see new riders in action for the first time and it gives Friday’s match a real attraction on top of the great buzz of anticipation we have seeing our own new look team in action again. ”

The Hammers include their strong top three of Peter Karlsson, Lee Richardson and Davey Watt who are joined in the main body of the team by Robert Mear and Kauko Nieminen. At reserve Kim Nilsson will partner Richie Worrall, who will be making his debut for the Essex based club.

Peterborough are led by their Danish Grand Prix rider Kenneth Bjerre along with three of his fellow Danes including his younger brother Lasse Bjerre, Jesper B Monberg plus Michael Jesper Jensen. Their team is completed with former Hammers rider Oliver Allen, Swede Linus Sundstrom and Richard Lawson.

The Elite League action gets underway at the Arena Essex Raceway with the pre-meeting parade beginning around 7.45pm with the first race scheduled for 8pm but it is recommended that fans turn up earlier as, at 6.45pm, the junior teams from the two clubs, the Young Hammers and the Thundercats, will take to the track in a four a side, six heat Anglian Junior League match. A full preview of this Junior Match will follow on Thursday.

Admission prices covering both meetings are: Adult £17, Senior Citizens, Disabled and Students £14, Unemployed £12, Children 17 to 18 years £12, Children 6 to 16 years £3, Children Under 6 years Free. Please note that proof of age or status may be asked for.

Tickets are available on the day at the pay booths, or advance tickets can be purchased via the Hammers online store, accessed by clicking the ‘Next Meeting’ image on the Lakeside Hammers homepage at www.lakesidehammers.co

Picture credit: Heat 4: Kim Nilsson (blue) and Lee Richardson on the way to a 5-1 for Lakeside – Lakeside Hammers vs Eastbourne Eagles Gavin Ellis/TGSPHOTO