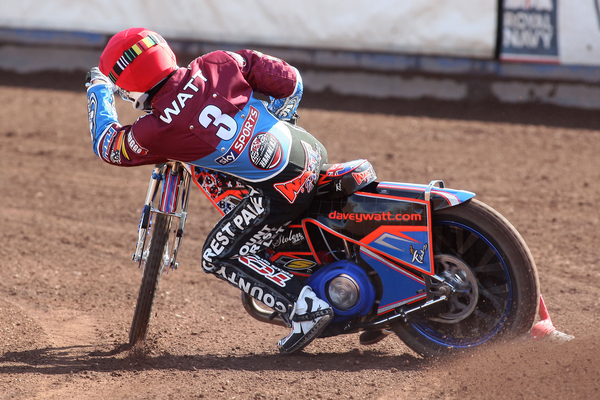 Despite losing their last two home meetings to the miserable wet weather gripping much of the Country, the Lakeside Hammers spirits are high after a dream start to the season.

Undefeated and top of an, albeit, early season Sky Sports Elite League table the Essex Club’s rating as one of this year’s top teams looks well placed but the team are taking nothing for granted as a week of inactivity looms before next week’s tough visits to Peterborough, on Monday 30th April, and Swindon, on Thursday 3rd May, are followed by the top draw home clash against favourites and defending champions, the Poole Pirates on Friday week, 4th May.

The Hammers Co Promoter Jon Cook stated: “In our plans this week we were left free to recharge the batteries after a busy run of home fixtures with it also being the first of the European Grand Prix season but, as things have transpired, it means we will have gone a month without home action when Poole come calling.

It’s very early days and next week will give us a truer indication of how things are shaping, although at the moment things couldn’t be gelling better. We have our first team order change to combat next Monday when we visit Peterborough with Kim Nilsson and Robert Mear swapping reserve and second string positions. In addition the first meeting in May could also see a change at No1. as the rolling averages of PK (Peter Karlsson), Lee (Richardson) and Davey (Watt) are all very close and that’s probably going to be the way they will be most months”

The Club have also confirmed that they will run Friday meetings for the first three weeks of next month, with Peterborough now coming to the Arena Essex Raceway on 11th May, which will sandwich their visit between Poole, who visit on the 4th, and Swindon, on the 18th. This means that the Hammers will be up against the other three big, in form, teams so far this season in the space of just fifteen days.