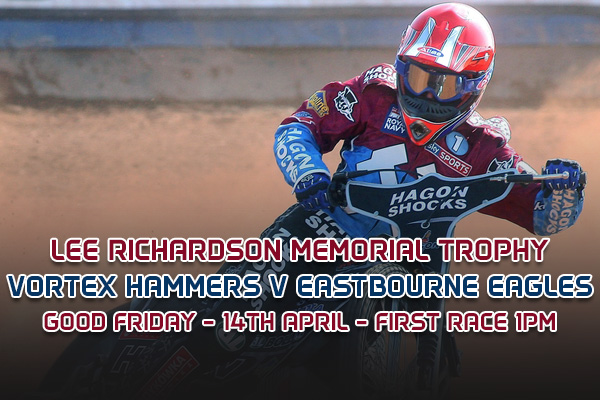 Lakeside will honour club legend Lee Richardson when they renew their historic rivalry with Eastbourne on Good Friday (April 14th).

The Vortex Hammers will face off with the Eagles in two meetings to get their 2017 season underway with the Lee Richardson Memorial Trophy up for grabs.

The sides will meet at the Arena-Essex Raceway at 1pm before making the trip to Arlington later that evening (7.30) for the second leg.

Hammers boss Kelvin Tatum believes the clash is a perfect opportunity to commemorate the career of Richardson, who tragically died in a track crash in Poland in May 2012.

The Hastings-born racer captained Eastbourne to Knockout Cup glory in 2008 and repeated the feat with Lakeside after making the switch to Purfleet the following year.

Tatum is relishing two exciting meetings with the Eagles to celebrate Richardson’s career and get a new era for the Hammers underway.

Said Tatum: “It’s very exciting to be rekindling our rivalry with the old enemy, and they should be two fantastic meetings.

That’s combined with the fact we’ll be celebrating and remembering Lee Richardson, who was a club legend at Lakeside and also enjoyed success with Eastbourne.

I think it’s a great idea to commemorate him, it’s also a perfect way for us to start the season. Particularly for Lakeside, it’s an exciting start to our first season in the National League and we’re all looking forward to it.”

Eastbourne promoter Martin Dugard said: “This for a long time, was our traditional Easter fixture and it is good that Lakeside have now joined us in the National League. With Kent in the same league, this is a perfect scenario for speedway in the South East of England.

“Kelvin Tatum and Jon Cook are both local to us and we are certainly looking to ‘put one over them’, if we can. It is good to have that rivalry. There’s nothing malicious about it but, of course, both teams will want to win this trophy which is a fitting memorial to Lee.”

The Lee Richardson Memorial Trophy is set to become an annual event at Easter between the two clubs, and thanks go to Terry Partlett for donating the silverware.

Ahead of the season opener, Hammers fans have a chance to meet the 2017 Hammers at a meet the riders night, which takes place on Friday the 7th of April, in the Garden Suite at The Park Inn Hotel, High Rd, North Stifford, Thurrock RM16 5UE.

The Vortex Hammers Press and Practice then takes place at The Raceway on Thursday the 13th of April, from 1pm, with all fans welcome to attend.