Rob and Robbo represent the Hammers 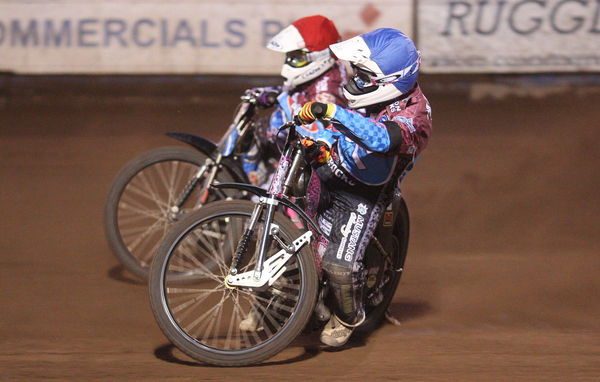 Hammers stars Robert Mear and Stuart Robson will both line up in the British Final, which takes place at Wolverhampton’s Monmore Green track next Monday (30th July) at 7.30pm.

The Hammers flying reserve Richie Worrall, originally scheduled to ride in one of the Semi-finals planned to determine the line ups for the main event, unfortunately lost his chance due to his recent leg injury.  Due to the unprecedented run of bad weather which had hit the country the Semi-finals were eventually cancelled, with the top sixteen eligible riders determined by averages, instead seeded through to the main event.

Looking ahead to the action, the Hammers doubling up rider Stuart Robson commented:

“I’m really looking forward to the final this year, it’s been a while since I last raced at Wolves but it’s a track I normally enjoy riding at so hopefully I can do well. It’s a shame Richie is injured because I think he would have been in the meeting too. It would have been his first British Final and I’m sure he could have done quite well in it, especially with the way he was riding before his accident.”

The full line up and draw for the event, which also carries a Wild Card for the British Grand Prix is:

Closer to home, Hammers fans are reminded that there is no meeting this Friday (27th July) due to the London 2012 Olympic Opening Ceremony.  The Hammers are next back on track at the Raceway on Friday the 3rd of August, when they entertain the famous Belle Vue Aces, who have recently parted company with their team manager Jim Lynch.

The Hammers will then be racing every Friday night throughout August when they take on the Birmingham Brummies (10th August), local rivals the Eastbourne Eagles (17th August), the Peterborough Panthers (24th August) and the Poole Pirates (31st August).  The Summer long “Kids for a Quid” offer will be valid for each meeting.

Tickets for each of the meetings may be purchased on the night or alternatively, tickets are also available in the week leading up to specific matches online via the Club’s website.

Tweet
« Hammers back with a bang » Justin rides purely Elite.