The Hammers must bounce back 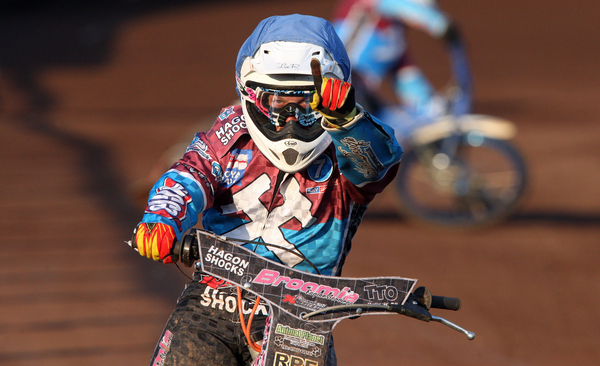 The Lakeside Hammers home Sky Sports Elite League match against the King’s Lynn Stars this Friday, 22nd June, is now a must win fixture if they are to keep their Play Off aspirations intact says the Hammers Co Promoter Jon Cook.

The Hammers went down to a heavy home defeat on Monday having been behind from the off against Swindon although a mid match fight back saw scores level at heat nine and Cook says it’s that fighting spirit that will need to be on show from the whole team come 8pm on Friday when the tapes go up for the opening heat.

Jon Cook commented: “Monday has gone now and we are lucky that we have a chance to get back on track so quickly to put it behind us. To be racing on our normal race night for the first time in a month should be to our advantage as the crowd always creates a great Friday atmosphere and this week is going to be absolutely crucial to pick up the win and stay at the right end of the League table.

Things are tough for the Club of course but no riders were making any excuses and we all know that the romantic idea that we can go on and win the League, will only happen with a great deal of hard work from all and a reinforcement of the squad on which we are working in a very difficult rider market.”

The only change in the Hammers line up for Friday’s match to that which lost on Monday is at reserve where Justin Sedgmen comes in for Richie Worrall who has to ride for his Premier League side, Newcastle the same evening. Sedgmen was present at the Hammers Raceway on Monday supporting his colleagues.

The King’s Lynn Stars are led by Neils Kristian Iversen who is paired with his fellow Dane Mads Korneliussen. They also include in their top five the current World Under 21 Champion Maciej Janowski, recently crowned Swedish Champion Daniel Nermark and 39 year old Joe Screen, who is a former World Under 21 Champion but deemed somewhat of a veteran at this stage of his career. At reserve the Stars field Polish rider Mateusz Szczepaniak and Kevin Wolbert from Germany.

The action gets underway on Friday at the Arena Essex Raceway with the first race at 8pm. Admission prices are £17 for adults, £14 for Senior Citizens, Students and Disabled, £12 for Unemployed and 17 and 18 year olds and children aged 6 to 16 inclusive £3 with children under six free of charge provided they are accompanied by a paying adult. Proof of age or status may be requested.

All tickets may be purchased on the night but, alternatively, tickets are also available online via the Club’s website at www.lakesidehammers.co

Tweet
« No joy for Hammers » Hammers back in the winning groove