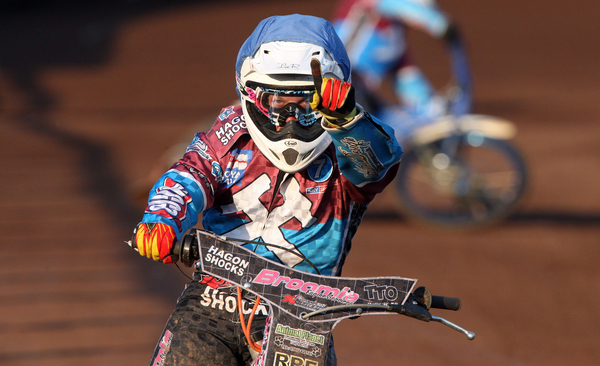 The Lakeside Hammers are celebrating reaching the 2012 Elite League Play Offs after Peterborough failed to overhaul their points total on Wednesday evening.  The Essex club will be pitted against title favourites, the Poole Pirates, in the Semi Finals and the first leg will be at the Arena Essex Raceway this coming Monday, 24th September, at 7.30pm.

It represents a huge achievement for the team who have suffered the loss of skipper Lee Richardson, who was killed in a track crash in Poland in May, and have struggled with poor form over the month of August.

Hammers Promoters Stuart Douglas and Jon Cook have reacted to the great news by reducing admission prices for Monday’s big event to £15 for Adults, £12 for concessions and £1 for Kids 16 years & under. It is also confirmed that a giant screen will be in place so that fans can keep updated with the second Semi Final featuring Birmingham and Swindon being run simultaneously.

Jon Cook commented after hearing Wednesday’s results saying: “After the season we have had this is stunning news. It’s a testament to the resolve of the riders to keep going and I can’t praise them enough for this achievement. I texted them all and said this is not because of a couple of results elsewhere this week but of a season’s hard work and we absolutely deserve it.

We have spent all but six days in the top four in the table and now we can plan for our own cup final this Monday. We are under no illusions it’s going to be tough but it’s been a tough season and if we can sneak the win on Monday at our Raceway then anything can happen in the second leg.”

“We hope all those Speedway fans in Essex, Kent and East London will take the chance to come and cheer us on. The boys deserve that and we have used the extra tv payment to reduce admission prices to show our gratitude to the fans who have stuck by us all year in the most difficult of circumstances.”

Tickets for the Semi Final can be purchased on the night, or via the clubs online ticket store.