The Hammers take on the Panthers 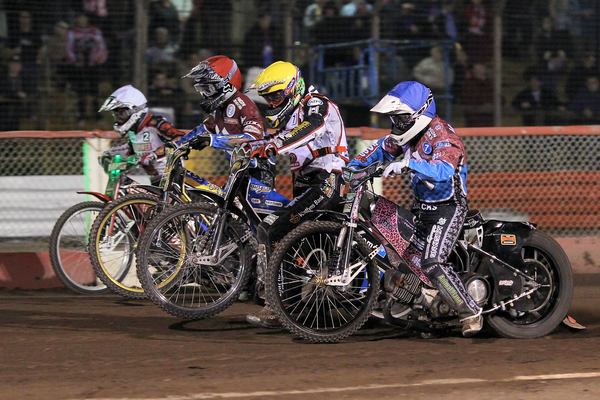 The Vortex Lakeside Hammers will open the door of their Arena Essex Raceway to fans this Friday, 22nd March, as they take to the track for the first time this season when they entertain the Peterborough Panthers in the second leg of an Elite Challenge match.

Following on from last season’s successful Open Night the Essex Club will again allow their fans, and visitors from the Panthers, the opportunity to see behind the scenes with the track open from 6pm for pits visit, track tour and the chance to visit the Referee’s Box and see the view by which the meeting is marshaled. The Home team will also be available for a photo session at 7pm in their new race suits.

Co Promoter Jon Cook commented: “Last year was a great night and this time we have added the competition of a meeting to follow. It seems an unusually long winter and we can’t wait to welcome back the fans and enjoy the first action of the season.”

The Hammers have retained in their line up this season four of the riders that made it through to the Elite League Play Off Semi Finals in 2012. Those riders are:- Australian Davey Watt, who retains the captaincy, veteran Swede Peter Karlsson, who will wear the No.1 race jacket, his fellow Swedish rider Kim Nilsson and Great Britain rider Robert Mear. Joining these four will be Piotr Swiderski, who missed out on last season in this Country through an injury sustained towards the end of 2011 but was a member of the Hammers side that year.

In addition the Essex based Club have brought in two new riders for the 2013 season in Great Britain International Lewis Bridger, who has spent the majority of his career at Eastbourne, and recent acquisition British rider Richard Lawson, who will combine his Elite League duties with the Hammers with those for the Workington Comets in the Premier League where he is their No.1 and captain. However, for Friday’s match against the Panthers he will be replaced by Stuart Robson as a guest as Richard Lawson was a prior engagement with the Comets. Stuart Robson has been a member of the Hammers squad of riders since 2009 but will be riding for the Newcastle Diamonds this season in the Premier League.

The Peterborough Panthers will be led by Danish International Kenneth Bjerre, who started last season with them following a year away from the club when he rode for King’s Lynn but his season was cut short due to injury. That also meant that he failed to retain his place in the Grand Prix series for this year.

He will be joined in their line up by Norbert Kosciuch, who returns to the Peterborough side having been involved with the Panthers since 2010, Australian Dakota North also returns to the club after having had a spell with them in 2011 and Swedish rider Linus Sundstrom returns for his third season with the Panthers. The remaining three riders in their 2013 line up are all new to the club. Dane Kenni Larsen has moved to the Panthers during the winter from Coventry for whom he had ridden for the past two seasons. American Ryan Fisher has performed well for them in the past as a guest as has Danish rider Patrick Hougaard. Fisher spent last season in the Premier League with Plymouth whereas Hougaard joins them from Belle Vue having spent the previous five seasons with the Manchester club.

The main action against the Panthers gets underway with the Grand Parade of riders at 7.45pm with the first of the 15 heats due to start at 8pm.

As part of this special evening, the club is offering an exclusive guided and signed track walk for our hard of hearing and deaf supporters at 5.30pm. This will include a visit to the referees box  and will be BSL interpreted by Tina Holmes. To book a place please contact tina@thisbsl.co.uk.

The admission prices have been frozen from those of 2012 and remain at £17 for adults, £14 for Senior Citizens, Students and Disabled, £12 for Unemployed and 17 and 18 year olds and children aged 6 to 16 inclusive £3 with children under the age of six admitted free of charge provided they are accompanied by a paying adult. Proof of age or status may be requested.