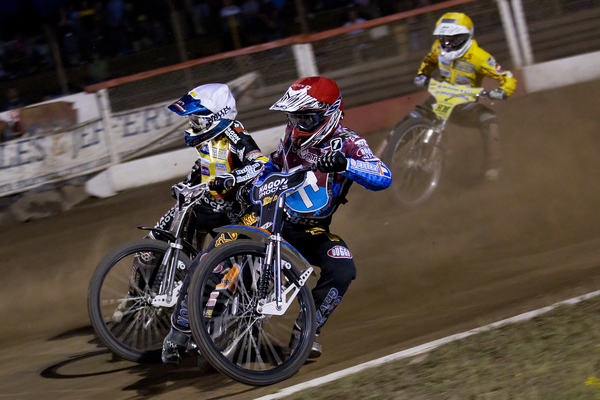 The Vortex Lakeside Hammers kept their Sky Sports Elite League Play Off hopes on track, but only just, with probably the greatest comeback in their history on Friday night at the Arena Essex Raceway against the League leaders, the Birmingham Brummies.

Two points down after twelve heats and having provided just two race winners in those heats (both from Peter Karlsson) few, if any, fans would have predicted what was to follow as first Peter Karlsson and Davey Watt then Richard Lawson and Piotr Swiderski teamed up for 5-1’s to win the meeting before PK & Watty combined again to bring home the vital maximum three League points in the final heat. The result moved the Vortex Hammers back up into fourth place in the League table above Poole and knocked the Brummies off the top position, albeit on race points over Wolverhampton.

A delighted Jon Cook commented at the conclusion of the meeting: “Wow, what a night. At heat 12 I thought we’ll do well to get anything out of tonight and then we’ve won the meeting before heat 15. That was true grit tonight from the four riders in those last three races, although full credit to Lewis Bridger for teaming up with PK on the two 5-1’s that kept us in it before the finale. There are no second chances at this stage of the season and that could prove to be the three heats that define our year.”