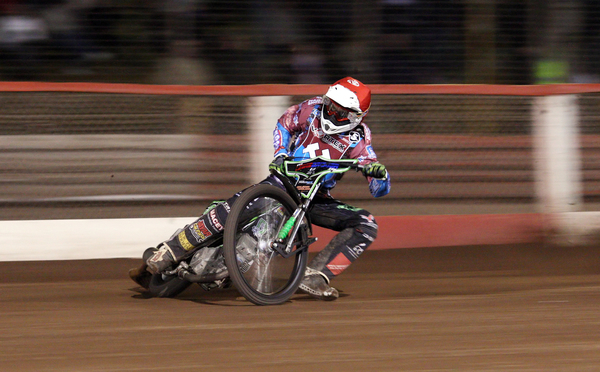 The King’s Lynn Stars are the Vortex Hammers opponents tomorrow, 23rd April, in a rare Tuesday Elite League match when the two teams meet at 7.30pm at the Arena Essex Raceway.

The Vortex Hammers move away from their traditional Friday night home action to stage this Tuesday event, which will be screened live by Sky Sports. The Stars have started the year well winning all three of their home matches and have picked up four points on their travels with a narrow three point defeat at Poole and a comprehensive ten point win at their local rivals, Peterborough, on Good Friday. Their tally of fourteen League points from five meetings currently places them in third place in the Sky Sports Elite League table behind Swindon and Wolverhampton.

The Vortex Hammers Co Promoter Jon Cook commented: “We are looking forward to this rare Tuesday evening meeting at the Raceway in front of the Sky Sports cameras and having had our last match, against Birmingham, fall foul of the weather the team need to get back out there on the track and make up for lost time. King’s Lynn have put together a strong looking team this year and are currently in third place in the table on 14 points and we need to take all three available League points against them to start our push back up the table.”

The Vortex Hammers are expected to go into this meeting minus their captain, Davey Watt, who is recovering from a broken scaphoid sustained in the home match against Swindon on 5th April. His rides can be covered by using the ‘Rider Replacement’ facility, which will enable any of the remaining six riders to take an additional ride.

King’s Lynn will be led by their Danish Grand Prix rider, Niels Kristian Iversen, who is currently in tenth place in the series after just two rounds having scored nine points in last Saturday’s round in Bydgoszcz, Poland, which secured him a place in one of the Semi Finals. He is joined in the Stars top five by two fellow Danes in Mads Korneliussen, who is their captain, and Nicolai Klindt, who joined the Norfolk club on loan from Wolverhampton over the past winter.

Australian Rory Schlein is also a newcomer to the Stars side this season having joined them from belle Vue where he rode in 2011 and 2012. Completing their top five they have named British rider Simon Stead, who spent the past four seasons with Swindon and who was a member of the League winning side last year. However, he dislocated a shoulder whilst riding for his Premier League club, Sheffield in their away match at Workington last Saturday and is doubtful for Tuesday’s match.

The Stars will use the ‘Rider replacement’ facility if he is not fit to ride and that will allow any of the Stars riders with the exception of Niels Kristian Iversen and Mads Korneliussen to take an additional ride.

12.40 update: At reserve, and in a change to the earlier announced line up, the Stars have brought in former Hammer Richie Worrall on loan and he will ride at reserve, replacing Australian Kozza Smith.

The admission prices are:  £17 for adults, £14 for Senior Citizens, Students and Disabled, £12 for Unemployed and 17 and 18 year olds, £3 for Children aged six to sixteen inclusive and children under the age of six admitted free of charge provided they are accompanied by a paying adult. Proof of age or status may be requested.

The action gets underway at the Arena Essex Raceway on Tuesday, 23rd April, at the slightly earlier time of 7.30pm with the Grand Parade of riders scheduled for 7.20pm .