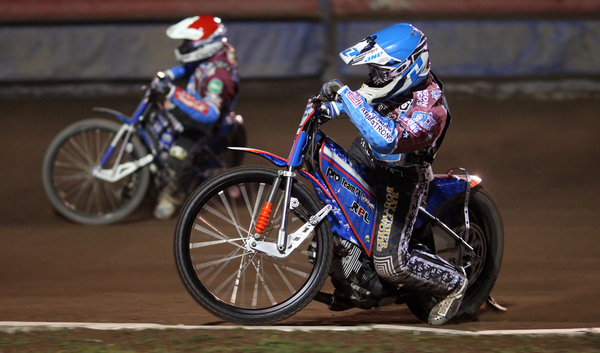 3pm UPDATE –  Coventry Rider, the seven times British champion, Scott Nicholls, has been ruled out of tonight’s fixture after suffering a broken bone in his foot.

The Vortex Hammers take to their Arena Essex Raceway this evening in a vital Sky Ports Elite League match against the Coventry Bees. The meeting will start at the earlier time of 7.30pm.

The admission prices for this meeting are: – £17 for adults, £14 for Senior Citizens, Students and Disabled, £12 for Unemployed and 17 and 18 year olds, just £1 for Children aged six to sixteen inclusive and children under the age of six admitted free of charge provided they are accompanied by a paying adult. Proof of age or status may be requested. Parking is free in the grounds of the Raceway.

Fans are reminded to retain their admission tickets from tonight’s meeting as on production of them on Friday, when the Hammers face the Poole Pirates, admission will be reduced to just £10 with the Child price remaining at £1. In addition any Coventry fans making the trip down from the Midlands this evening will be allowed admission at just £10 on production of a Coventry home programme from this season. The entrance for these Coventry supporters will via the double gates at the top of the Approach road.

All regular tickets may be purchased on the night but, alternatively, they are also available in advance online via the Club’s website.

The Vortex Hammers go into this evening’s meeting at full strength and will, therefore, see the debut of their new signing the former Polish Grand Prix star Sebastian Ulamek.

Coventry will be led by former Hammer Krzysztof Kasprzak, who finished on the rostrum in third place at last Saturday’s British Grand Prix, which took place at the Millennium Stadium Cardiff . Many believe that Kasprzak was unfortunate not to win the event as he was leading the Final when it was stopped. In the rerun he was holding second place but eventually finished third after an attempt to take the lead on the final bend failed and he was overtaken by Niels Kristian Iversen.

The Vortex Hammers go into tonight’s match hot on a winning run of four matches (two at home and two away) and Coventry gained maximum League points from their home and away victories against Peterborough on the end of May Bank Holiday Monday so it is all nicely set up for a great battle between two of the on form sides in the Elite League.