Vortex Hammers take on The Brummies 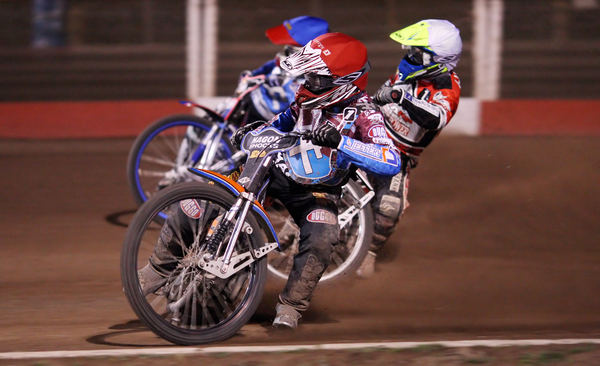 Following on from the six Sky Sports Elite League points gained from their two away and one home match last week The Vortex Hammers next meeting will be a vital one for the Essex based Club as they face the Birmingham Brummies at the Arena Essex Raceway this Friday, 17th May.

Currently the Brummies occupy fourth place in the Elite League table with the Vortex Hammers fifth and come the end of the season it will be the top four clubs that will go forward into the Pay Offs for the Sky Sports Elite League title. Therefore, it can clearly be seen that Friday’s home match against Birmingham is an important one for both clubs.

The Vortex Hammers Co Promoter Jon Cook is fully aware of the significance of this fixture and commented: “This is our boys chance to show we are up to the standard needed to be contenders and following Poole’s win at King’s Lynn last night (Wednesday) we have a potentially very open season ahead. Birmingham, along with Swindon, look to be the class of the field to me and I think that this meeting could easily see the result not decided until the last few heats.”

The Vortex Hammers go into Friday’s important meeting at full strength with the same team that gained the win at Poole and then saw off the challenge of Peterborough last Friday at the Arena Essex Raceway.

The Birmingham Brummies include four British riders in their team, all of whom competed in the British Final, which was held at Wolverhampton earlier this week.

They had varying success in that National Championship Final with their No.1, and former Cardiff Grand Prix winner, Chris Harris, scoring 13 points in the qualification heats, which put him straight into the Final, where he eventually finished in third place behind the top qualifier Tai Woffinden and runner up Scott Nicholls.

The Brummies captain, Daniel King (a former Hammers rider), made the Semi Final having scored 10 points in his five qualification heats but finished in last place in that Semi and, therefore, failed to get through to the Final. Josh Auty failed to make the semi Final but scored a creditable eight points whereas Ben Barker had a difficult meeting failing to score from his first three rides, which included an exclusion, but did manage two second places in his remaining two rides to finish on four points. The remaining three members of the Birmingham team are Australian Jason Doyle, the Argentinean born Italian Nicolas Covatti and their in form reserve Martin Smolinski from Germany.

The admission prices for Friday’s meeting are: £17 for adults, £14 for Senior Citizens, Students and Disabled, £12 for Unemployed and 17 and 18 year olds, £3 for Children aged six to sixteen inclusive and children under the age of six admitted free of charge provided they are accompanied by a paying adult. Proof of age or status may be requested. Parking is free in the grounds of the Raceway.

The Arena Essex Raceway is situated adjacent to junctions 30/31 of the M25 just north of the Dartford River Crossing and is off the A1306 east of the motorway close to the Lakeside Shopping Complex.

The action against the Birmingham Brummies gets underway at the Arena Essex Raceway on Friday, 17th May, at 8pm with the Grand Parade of riders scheduled for 7.45pm.