What is the new RFW logo on the Hammers Race bibs? The Walker family explain… 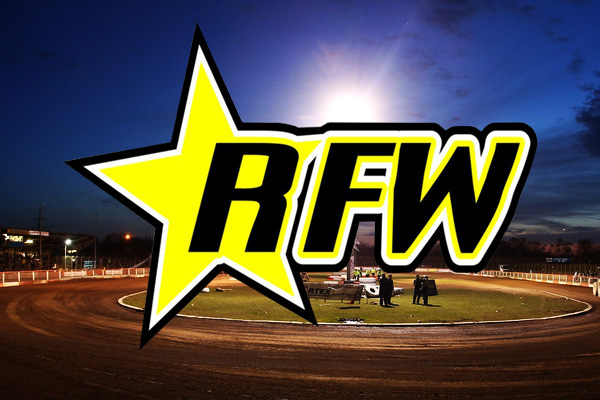 This sponsorship came about after we lost our beloved husband, dad, grandad and friend, RONALD FRANK WALKER to mesothelioma, the cruel and aggressive tumours, caused by asbestos exposure.

Ron was a fit and active 64-year-old carpenter who never knowingly worked with asbestos. He was due to retire in December 2017, but he was taken from us on the 15th October 2017 after a brave 4 month battle with this wicked disease. He was a very special man – kind, humble and selfless. He truly was one of a kind. Life does not make much sense to us now and it has broken us as a family.

We wanted him to be remembered and we wanted to create some legacies in his name in the things which he loved, with speedway being one of them. With the help of Mark Sexton and the Lakeside Hammers Community Programme, we have created this perfect legacy for Ron.

On the back of the team race bibs for the 2018 Championship season, there is a yellow ‘RFW’ logo with a star attached to it. Ron is out there with the team, doing all those laps and enjoying it, just as he would have been if he was still here.

Ron loved Speedway! He was first introduced to speedway at Wimbledon in the early 60’s by his parents, Elsie and Bill. He loved standing on the terraces watching the ‘Dons’ and we still have his scrapbook from that time. His wife, Sue, was also a Wimbledon fan. When they started going out with each other, Thursday nights were spent watching the ‘Dons’ together. In the 70’s they would go and watch Wembley however when the family came along they did not get to watch speedway as much as before, but Ron’s Uncle Bill kept them informed of what was happening on the speedway scene.

In 2003, Ron’s mum brought them tickets to go to the Millennium Stadium in Cardiff to watch the Speedway Grand Prix. They enjoyed it so much that they continued going for years after. One of Sue’s precious memories is of watching Ron’s jubilance in 2007 witnessing Chris Harris win at Cardiff.

For Ron’s birthday in 2016 we arranged a VIP visit to Lakeside. He visited the pits where the riders were preparing for the meeting against the King’s Lynn Stars, he watched from the centre green and was even interviewed from out there. He had his programme signed by the riders and Kelvin Tatum and Mark had also arranged for him to meet Andreas Jonsson, one of his favourite riders and have his photo taken with him.

Ron introduced his 8 year old granddaughter, Kiera, to the joys of the speedway scoring system, and even she loved it. Ron was overwhelmed by it all, it really was a special family day. That day is now such a wonderful memory for us to have.

Thank you to the Lakeside Hammers for that special day but also for your understanding and compassion in helping to make these legacies possible for him at Lakeside 2018.

It means a lot to us. He loved this sport, he loved yellow and he is our little star – it is such a fitting tribute. This sponsorship enables us to remember Ron in the most wonderful way. We also would like to recognise and thank HASAG, a charity established to raise awareness and provide support those affected by asbestos related diseases for their continued support.

We have set up a Ron Walker Memory Facebook page where we can post pictures and memories of him and share these wonderful legacies, hopefully posting glimpses of his RFW doing those laps! Heat 10 will be ‘Celebrating the life of Ron Walker’ so maybe you could give an extra loud cheer and shout “Love it!” (it was one of Ron’s sayings..!), as they pass the finishing line.

He’s our hero and our star, always and forever.

Tweet
« Season Ticket deadline » One week until tapes up!