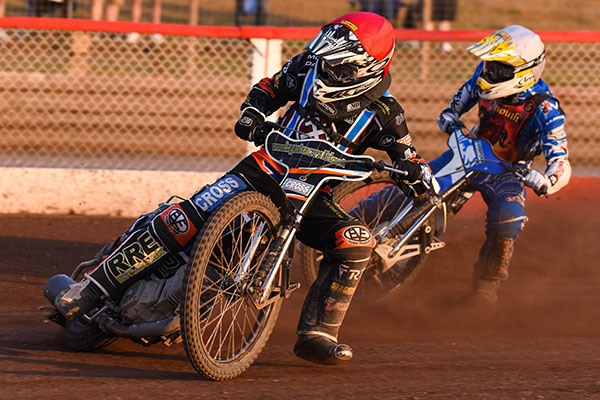 Hammers Number 1 Zach Wajtknecht stormed his way to another 15 point maximum as the Vortex Hammers secured a consolation National League point from their 46-44 defeat at Birmingham.

The Bristol based racer was in breathtaking form against his old club as he sealed a third unbeaten display from his last four fixtures.

While the Hammers were never able to get their noses in front, they were always within touching distance of the reigning Champions.

And even when they fell eight points behind with three races to go, the Hammers were once again able to call on Wajtknecht and club captain Ben Morley for two 5-1s to secure a last gasp point.

Said Wajtknecht: “I feel so good right now and I’m just over the moon to be scoring how I am for Lakeside.

Ben and I were able to pull it off again in the big heats but we pushed Birmingham all the way right from heat one.

Birmingham is a tough place to come to so we’ve got to be happy with a point – but it could have been more.

Paul (Hurry) slid off a couple of times, a few other things here and there didn’t go our way, so we maybe could have sneaked the win but we’ll still go home pretty happy.”

The result ended the Vortex Hammers’ run of four consecutive wins, but the league point picked up sees them close the gap on the third tier’s top two.

Racing returns to Purfleet this Sunday afternoon (3pm) when the Isle of Wight Warriors are the visitors.