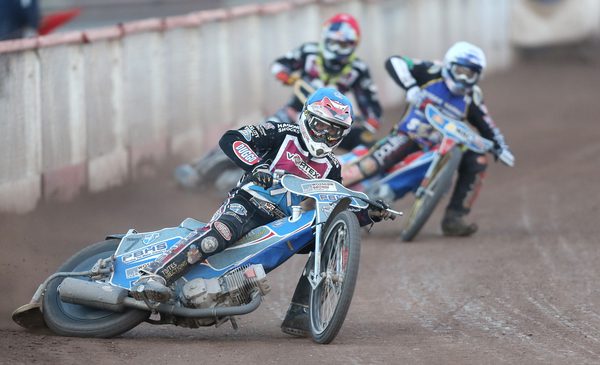 The Vortex Lakeside Hammers secured a second successive victory at The Raceway with a dominant 57-34 win over The Wolverhampton Wolves, in front of the Sky Sports cameras.  In a meeting held up after the third heat due to rain, the Hammers ran out convincing winners with Mikkel Bech top scoring with 13 paid 14, whilst Ashley Birks delivered a superb 11 paid 14 at reserve.

The Hammers got off to the best possible start, with  maximum heat advantages in the first two heats. In the opening race Mikkel Bech took victory after a sharp gate, whilst the Hammers skipper Andreas Jonsson bustled past Jacob Thorsell around the second bend, before moving under Freddie Lindgren as the entered bend 3 of the first lap.

The first reserves race was called up for an unsatisfactory start. In the re-run Hammers number 6 Adam Ellis showed a return of confidence with a tapes to flag victory, whilst fellow Hammer reserve Ashley Birks took the wide line around Wolves reserve Lewis Blackbird.

As rain began to fall, Wolves clawed their way back when former Hammer Peter Karlsson gated to victory, whilst the impressive Musielak tussled with Nilsson for second spot, eventually getting the better of the Hammers rider at the end of the third lap.

After a delay to allow the rain pass through and for track work to take place, the following three heats saw shared results.  American Ricky Wells got the better of the fast gating Birks to take the flag in the fourth, with Lawson picking up a point.  In the fifth, Adam Ellis took a tumble after being squeezed out in the first bend, but with no red lights appearing, he remounted a distance 4th, as Bech took the victory. Kennett took three points ahead of Karlsson and Lingdren in the 6th, before the rain fell again.

Once it cleared, Hammers went up a gear, taking a maximum 5-1 in the seventh, with Jonsson team riding his fellow Swede, Kim Nilsson to victory, whilst the pacy Ashely Birks led Lawson home ahead of Blackbird and Thorsell, who in his efforts to pass his teammate, hit the deck after clipping the airfence on the fourth  bend.

Following airfence repairs, Bech and Birks, in as a reserve replacement for Ellis, continued the Hammers dominance, with Bech commanding the second bend, and Birks sweeping round Wells on bend 4.

Lindgren, deployd as a tactical in the 10th, led from the gate, with Kennett in hot pursuit, and eventually finding a way past the Wolves number 1 on the back straight of the third lap, much to the delight of the Hammers fans and promotion. A shared 4-4, with Nilsson getting the better of Thorsell gave the Hammers breathing space with a 16 point advantage.

Musielak again delivered an impressive ride in heat 11, sweeping round Beck on the fourth bend, after the Danish Star had taken the lead after a tight opening first and second bend.  Ellis and Birks again dominated the second reserves race, with Blackbird eventually slipping off on bend 2 of the second lap whilst giving chase.

Karlsson showed his knowledge of the quickest way round The Raceway in the thirteenth, as Jonsson and Nilsson picked up second and third.  The penultimate heat saw another talking point, when Musielak went wide on the second bend of lap two, taking down Kennett who clipped his back wheel, with the referee excluding Kennett much to the disbelief of the home straight. In the re-run, Musielak gated and was leading until he picked up extra drive and hit the airfence on the fourth bend. With Wells in second, and Lawson in third, the race was awarded as a 3-2 with Musielak excluded.

The nominated heat 15 saw Nilsson gate, with the Wolves pairing of Wells and Karlsson team riding ahead of Bech for three laps, until the American lifted violently on the back straight of the final lap. As Karlsson was forced momentarily to slow to avoid his teammate, Bech swept through to deliver a final 5-1.