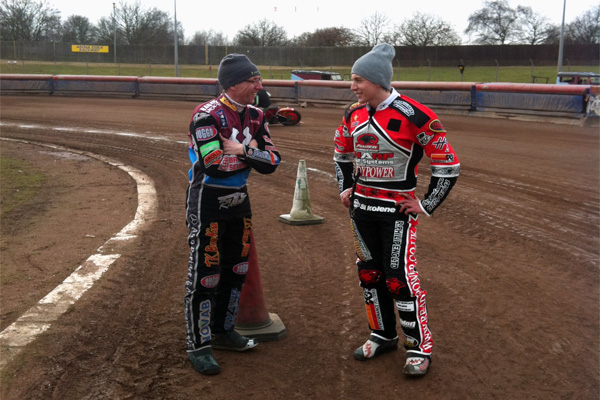 The Lakeside Hammers season will now begin on Good Friday, 29th March, as the Club have decided to cancel this Friday night’s challenge match with Peterborough.

Having staged a training session today (Thursday) for the entirety of which large parts of the inside of the track where unable to be ridden on and a temporary white line used, the Club have decided in the face of further forecasts of poor weather and near freezing temperatures there is no alternative but to cancel and hope that spring raises its head in time for the start of the Elite League season next week.

The session itself saw all of the Hammers team take to the track, except new signing Richard Lawson, as well as Peterborough counterparts Linus Sundstrom, Kenni Larsen & Kenneth Bjerre, who all rode on their own due to conditions.

Jon Cook the Hammers Co Promoter explained: “In the current weather situation it was a useful workout even though we couldn’t utilise all of the track. It was also day one for our new training partner Russell Paine and well done to him and his helpers for a superbly organised day for the 30+ trainees. We look forward to their next visit when we hope conditions and temperatures are improved”.

Cook continued: “It’s a huge shame for us and all clubs to be encountering this current spell of weather but it’s something we can’t control and rider safety and the comfort of fans is our priority. We are now planning a further training session for most of the team next Thursday evening from 7pm and fans will be most welcome to attend.”