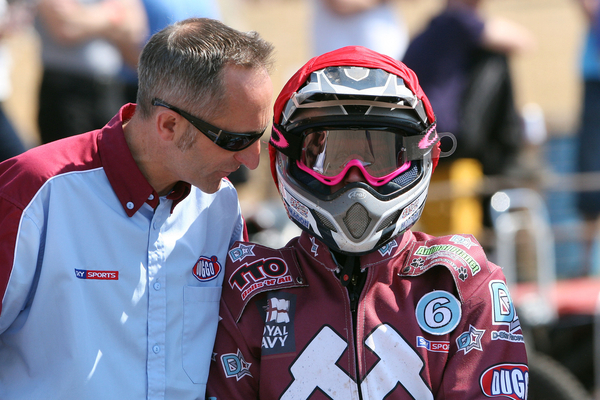 The Lakeside Hammers Team Manager, Neil Vatcher, is ‘chomping at the bit’ to get the forthcoming Elite League Speedway season underway after the announcement of the Essex club’s new team line-up for 2012 was greeted with great excitement by fans of the Club.

Vatcher joined the Club last season, initially to oversee the youth side of the team, but was quickly promoted to first team duties and will concentrate solely on senior matters in 2012 as he earned an immediate respect with his managerial and motivational style.

Neil Vatcher commented: “I can hardly contain my excitement at the team that Stuart (Douglas) and Jon (Cook) have put together for 2012 and it’s fantastic that the fans so obviously share that enthusiasm. Last year we made the very best of the season after a poor start and I think this team can move us forward at the crucial end of the season when we have been caught lacking in the past. Riders like PK (Peter Karlsson) and Davey (Watt) along with Lee (Richardson) will give us that home edge in two leg matches that will serve us well and I can’t wait to start working with the nine riders on achieving our goal of silverware”.

Vatcher continued: “Joining the Lakeside Hammers last year was something of a dream come true to manage at the highest level and to play a part in the winter team building has been a real privilege. I know Davey very well and was very keen for him to join us and to have PK also agree to join really was the ‘A team’ I was hoping we could put on track. We now have the perfect combination of youth and experience and I will be looking for Lee, PK and Davey to take Robert (Mear), Kim (Nilsson) and Justin (Sedgmen) under their wings as it’s very much a team effort from here on. In fact I know Davey has already done that, to a degree, with Justin this winter. I also know Ritchie (Worrall) very well and fans will be very pleasantly surprised when he takes to the track, as he has already shown down under in Australia this winter, that he is ready for his shot at the big time. In addition with Robbo (Stuart Robson) and Kakke (Kauko Nieminen) to pick from on a ‘horses for courses’ basis we are well equipped to make our mark.”