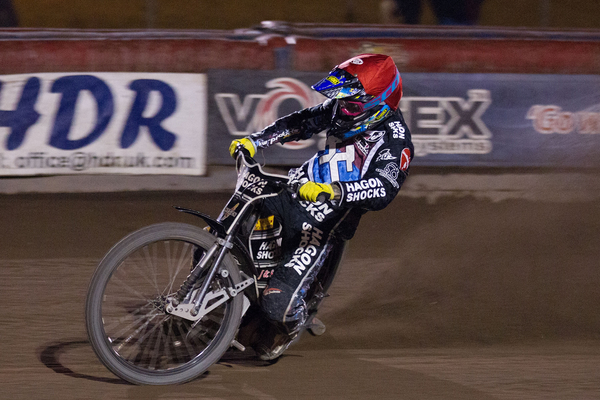 The Lakeside Vortex Hammers took all three Elite League points with a 35-26 victory over the Poole Pirates,  in a meeting which was abandoned after heat 10, a result of heavy rain which first began to fall during heat 5.

The Hammers started the meeting in dominant form, with Kim Nilsson leading from the tapes and the returning Hammers captain, Davey Watt hunting down and passing  Dakota North after the third lap to take a maximum heat advantage.

The fast track reserves race saw the Pirates hit back with Kyle Newman passing Adam Ellis, whilst Compton kept  ahead of Morley.  New Hammer Danny King made an impressive swoop from gate four in the following race, to follow and then take the lead past Milik coming out of the third bend, but with Richard Lawson caught behind the Poole pairing, the points were shared.

Lewis Bridger entered the Arena for heat four and produced an impressive turn of speed exiting the second bend on lap two to steam through and ahead of North and Newman for a further shared heat.

As the first spots of rain fell, Davey Watt and Danny King teamed up to extend the Hammers lead in heat 5 with a second maximum heat advantage. The Hammers captain leading from the gate, and King delivering a neat cut back on the second bend to squeeze out Grajczonek and Milik.

Bridger returned in heat six to take his second heat win of the evening over the fast charging Janowski, but as the rain got heavier, conditions became tricky for the riders, as Ellis took a tumble on the third bend in heat 7.  After an intense downpour passed, the track staff managed to get a large amount of surface water off the track, enabling Kim Nilsson to lead and win from the gate in the re-run.

Heat 8 saw Lawson and Bridger dominate in the wet conditions. As Lawson lead from the gate, Milik retired at the end of the first lap, enabling Bridger to move into third and then pass North on the second bend of lap three, whilst also removing his googles, to follow his team mate home for a third maximum heat advantage. In the second fast track reserves race, Ellis took another fall on the first bend, before the race was awarded with Compton falling whilst under pressure from Morley on the exit of bend three.

The final heat of the night saw Janowski nominated for a tactical ride, but with Milik again retiring, the Hammers slotted in behind the Pole to keep the Pirates advantage to three points.

After further discussions between the meeting officials and the riders, it was decided to bring the proceedings to a halt after the tenth heat.